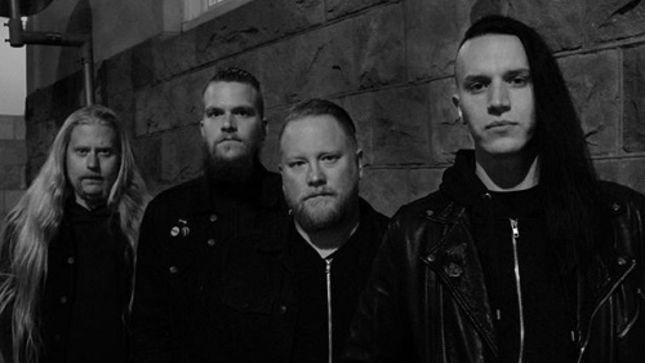 Swedish death metal cult Disrupted have shared their new track "Human Stew". The song is the second to be revealed from the band's sophomore album, Pure Death, set for international release on October 26th via Memento Mori on CD format; the vinyl version will be released by De:Nihil Records on October 9th.

Pure and total Swedeath: one will find no better modern, old-style example of it than Swedish juggernaut Disrupted. Naturally, Pure Death is as fitting of a title as they come! This sophomore album is massive in every respect.

Disrupted specialize in ultra-crunchy, extremely rotten, heavy-as-a-concrete-block, and genuine-to-the-bone death metal that their country was worldwide known for in the late '80s and early '90s. No nice melodies, nothing experimental, no progression: think Nihilist / Entombed, Interment, Grave, and God Macabre with a healthy dose of D-beat ala more recent acts such as Bombs Of Hades or Bastard Priest, and you'll get quite an accurate picture of what to expect. Simply put, Disrupted don't try to be anything they're not - and what they are is proud 'n' powerful Swedeath, straight from the source. As such, Pure Death is an album that retains the old glory and aesthetics of the Swedish tradition but enhances the sound, the speed and, yes, the heaviness. And they pack it all into finely honed songwriting that sticks in the brain and sticks to the ribs... if they haven't already crushed 'em!

And for such a young band, Disrupted have quite an enviable pedigree, as Pure Death features some hot-shit guest appearances: guitar solos by Per "Sodomizer" Eriksson (Bloodbath, Katatonia), Tomas Åkvik (Lik), and Mats Andersson (Wretched Fate), and guest vocals by none other than Nick Holmes (Paradise Lost, Bloodbath). Want to know exactly what you're getting into here? The simple-yet-elegant cover art courtesy of Woodcvtter Illustration should say more than enough. Time to rot again - only more gruesomely!