Swedish Professor of paleontology and metal aficionado, Mats E. Eriksson, recently launched his exciting new book project; Another Primordial Day – the paleo metal diaries. This tome deals with the amalgamation of science, arts and popular culture, and more specifically the author dives headfirst into heavy metal, paleontology, and reconstructions of long dead things. Eriksson provides ample examples of how he has managed to combine his life-long love affairs with these subject matters and discusses the benefits from a personal as well as societal point of view. With a witty sense of humor Eriksson describes “the good, the bad and the ugly” excavated from the fossil record and places those ancient organisms in an unorthodox and novel setting.

In the new Primordial video clip below, Eriksson shows some of the awesome content of the book:

Another Primordial Day includes tales of a bizarre traveling exhibition on fossils named after rock stars, as well as unconventional ways of creating music with paleontological connotations (while in the process revealing their impeccable fit). Furthermore, Eriksson addresses the music business and its unexpected close ties to ancient life, how God and Satan are connected to paleontology, why a fossil free world is unwanted, and he makes a convincing case of why Swedish biology superstar Carolus Linnaeus (1717–1778) was in fact a “metal head”. You will get completely unnecessary information on fossil heavy metal worms, weathering-resistant dinosaurs, stage diving antics at natural history museums, peculiar anecdotes on, and unique photographs of, Lemmy Kilmister, King Diamond, Accept, Wolf, Seance, and many others, all taking place in a “paleo setting.” 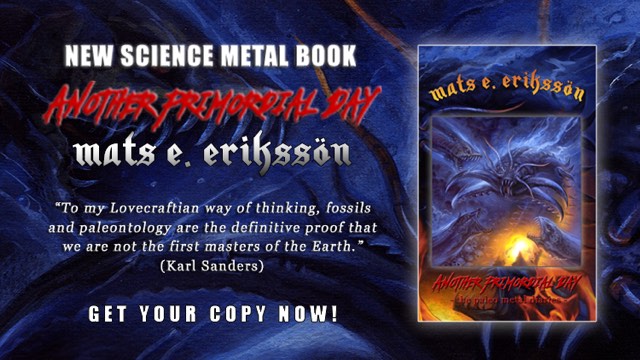 The book is subdivided into two main chunks: beginning with a brief introduction to all things dead in the first part, and their subsequent, metaphorical resurrection, by means of arts and music, in the second part. As opposed to the current era that seems to be largely affected by “fake news” and “alternative facts”, this nonfiction book is based on research. Moreover, for the science-minded, fact loving person it also includes an extensive reference list spanning almost 2000 years’ worth of relevant literature, extending from the year 77 up until today.

Order the book at this location .