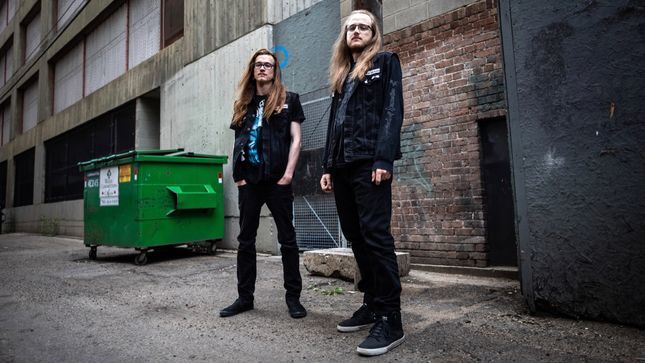 Painting their canvas of extreme music with inspirations of real-life stories of murder, conspiracy, supernatural horror, and terror, Edmonton's Tales Of The Tomb unleashed their new EP Volume Two: Mendicium this past September. They have posted a new playthrough video for the track "Nine Eleven" which can be viewed below.

The band explains the story behind the track:

"Very few people (if any) are unaware of the tragic events that unfolded on Sept 11. 2001. We originally wrote this song for the last show of another Edmonton local band called Villainizer. When starting to plan out the second EP we wanted to have a concept like our first one. With songs like 'Nine Eleven' and 'Faul' wrote this point. We look common factors were in the songs and came to the conspiracy/lies concept. This EP is an important installment that embodies the fundamentals of the band — the reality is more horrifying than fiction. This is a concept EP based on the Latin word 'mendacium' — meaning untruth and or to be lied to. The first single 'Nine Eleven' is just that — presenting a version of tragic historical events from various angles and the alleged truths that were presented. The intention of each song is to unmask the deception forced upon the masses pushing them to challenge their own perception of reality."

The EP is a vicious bite of grinding blast beats, technical shredding accompanied by venomous guttural lows. Inspired by true events, the duo offer up gore-filled lyrics with a quivering soundscape. The EP was mixed and mastered by Cryptopsy guitarist and head engineer/owner at The Grid Studios Christian Donaldson along with featuring artwork by Tony Midi of Tonymidi Artworks.

The EP also contains a bonus track about the Japanese horror film Mermaid In A Manhole, which the band have put together a new lyric video for.

The band explains the story behind the bonus track in further detail: "'Mermaid In A Manhole' is the only song we have written that is truly-fictional. Based on a Japanese horror film Mermaid In A Manhole. The song focuses on a painter that is suffering from depression, who disembowels his wife while in a psychotic state. The story of the song 'Mermaid In A Manhole' does not really fit into our conspiracy theme we have for this EP. This is why we decided to list it as a bonus track to give it a proper release and the band had no plans to write more true-fiction based songs. Sonically we tried to recreate the psychosis the painter was going through, we wanted to represent the chaos that must have been going on in the painter's mind to have brought himself to murder his wife. There is a sample at the end of the song, which has the sound of chopping and a man speaking in Japanese. This is audio taken right from the movie at the part where the painter is sitting on the ground covered in blood chopping up the remains of his mermaid saying, “My Mermaid, My Mermaid is dead."