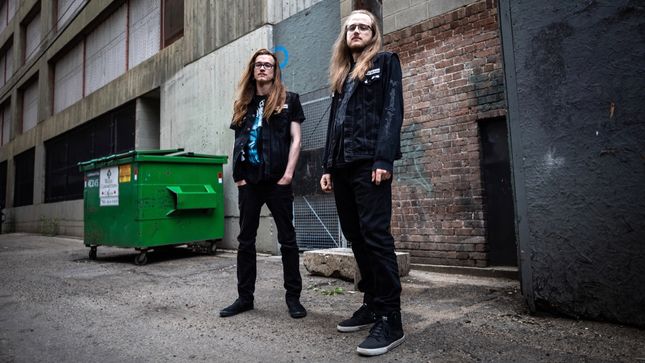 Painting their canvas of extreme music with inspirations of real-life stories of murder, conspiracy, supernatural horror, and terror, Edmonton's Tales Of The Tomb unleashed their new EP Volume Two: Mendicium this past September. In support of the release, the band is sharing their latest video for their track "Dyatlov Pass Incident".

The band explains the story behind the song: "9 hikers disappeared in what is now called the Dyatlov Pass in Russia. This incident had inspired many different conspiracies trying to explain what happened to the 9 hikers that went missing and were later found dead in the mountain range. Because there was a random unidentified scrap of clothing that looked to come from a military uniform found at the sight of the event. We are taking the angle put forth that the hikers unknowingly stumbled across a military weapons test and met their demise. Basically, they were there at the wrong place at the wrong time and the government was forced to cover up their deaths that the weapons test caused. There was evidence of the hikers ripping the tent from the inside and one of the hikers was found with extensive radiation burns, unclothed, fingernails and hands ripped apart from what was later determined to be from trying to climb the surrounding trees and much more. The song is written push-pull between the chaos of stumbling into this extension event vs. a seemingly normal journey. This was the last song written and displays the direction we are trying to move into from our past EP."

A sonic attack layered with grinding blast beats, injected with menacing guttural lows - a sound straight from hell with gore-filled lyrics leaving little to the imagination, destroying your eardrums like a corpse is erased in an acid-filled bath. The EP was mixed and mastered by Cryptopsy guitarist and head engineer/owner at The Grid Studios Christian Donaldson. The EP also contains a bonus track about the Japanese horror film Mermaid in a Manhole. Featuring artwork by Tony Midi of Tonymidi Artworks.