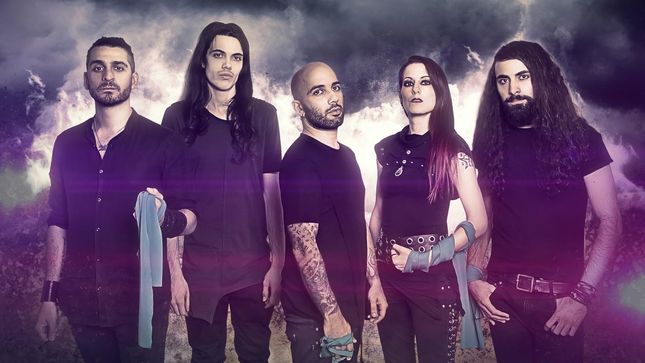 Italian symphonic metal five-piece, Temperance, have just released their heartfelt new song, “My Demons Can’t Sleep”, off of their upcoming album, Viridian, out on January 24 via Napalm Records. The new single is about the demons that everyone harbours inside of them: all of the inner troubles, issues, fears, rage and daily struggles that are often hidden away from the world. “My Demons Can’t Sleep” paints a picture of those feelings in a beautiful way and symbolizes a beacon of hope in the darkness of those frenzied thoughts.

Temperance’s journey through the depths of the subconscious was filmed in the somber 14th century Castle of Verrès. A young woman enters the castle and roams around the hallways, seeming to be trapped within the walls of the castle - equally imprisoned by her insurmountable demons. When the lyrical modification in the chorus hits, she takes her first steps outside and walks towards a white horse, a symbol of freedom and self-empowerment. Track lyricist Michele Guaitoli states that this scene portrays the moment where the protagonist realizes that they are the ruler of their own life. During the change throughout the song, they realize that their past faults or mistakes, even fears, are meant to be there to help them grow. Facing all of that instead of running away is the only solution to becoming stronger.

Marco Pastorino, singer and guitarist, comments: "You asked for the classic Temperance sound... so here we go! 'My Demons Can't Sleep' is probably the first song we wrote for Viridian; a very catchy track with a great guitar riff and also a nice interaction between our three voices. Definitely one of the most melodic tracks of the album, it will surely be an anthem for our live shows! The lyrics were written by Michele and it's one of my favorites in the album. He talks about our daily troubles and fears, but in the end, with our inner strength, we can change everything."

Watch the official video for “My Demons Can’t Sleep” below: