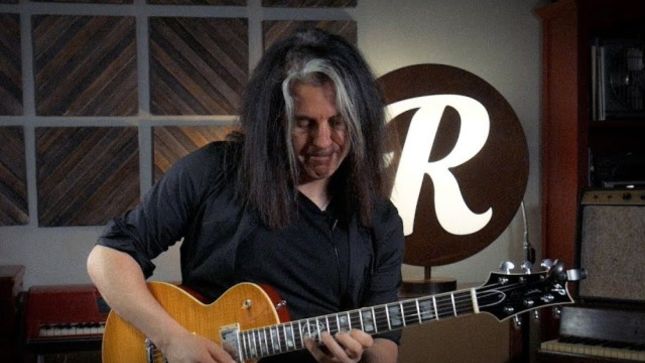 On the latest episode of Let There Be Talk, Testament guitarist Alex Skolnick discusses his multi-faceted career including the time he played guitar in Ozzy Osbourne's band for a week, the time he auditioned for the Spin Doctors, and joining Testament. Check it out below.

Skolnick: "I auditioned during '95. At that point, I think Zakk (Wylde was starting to do his own thing; maybe it was Black Label Society. They recorded Ozzmosis; I was recommended, I got sent demos of Ozzmosis, they sent me everything Ozzy did... I still have them. The audition was in London - they had a whole line of guys there. I was told beforehand that Ozzy hates to rehearse, he'll probably just call out a song. I heard someone say, 'Dude, nobody has lasted a song.' Deen Castronovo (Journey, The Dead Daisies) was on drums, Geezer Butler (Black Sabbath) was on bass."

He called out three songs. I think the second song was 'Crazy Train.' I was doing deep breaths. 'This is not happening...' It went well, they wanted me to come back the next day. So I came back the next day, we did a whole setlist, like 10 songs. I think three months went by, they didn't know when they were going to set up the auditions so, 'You'll get a call, and we'll set up a flight. Just be ready.' So I got a call from Sharon and she said, 'Could you get on a plane to London today?' out of the blue.

"It ended up not working out. I got the gig according to him (Ozzy). They booked a show in Nottingham, a medium-sized theater that's on the circuit, but there was one more rehearsal and he didn't make it, he had a sore throat. The gig was off, Geezer was angry, and then it was on again. Everything happened on a whim, I just never experienced that. Once it was back on again, the crew had already left, so me and the drummer and a couple other guys were huffing gear. The show went well, Ozzy told me that I got the gig, he gave me a big hug and the whole crew said that they didn't see him that happy since Randy. That was crazy. The only one that didn't congratulate me afterward was Sharon.

So I got a call weeks later, 'I'm sorry.' I'm assuming, 'I would've heard something by now,' but yeah, knowing what I know now, I think that she, as an entertainment person, she was used to the Zakk thing. She's used to Zakk, the lumberjack, and Joe Holmes got the gig."

Alex Skolnick Trio’s new album, Conundrum, is out today via Palmetto/MRI. A video for the track "Culture Shock" can be found below.

“It represents the sense of confusion many of us are feeling in the midst of the strangest sociopolitical upheavals of our lifetimes,” says Skolnick, the guitarist and composer who helped define thrash metal as a founding member of Testament, before establishing himself on the international jazz scene. “This album captures many styles in an effort to channel that angst into art and inspire others to do likewise.”

Ironically, given its globally pertinent message, Conundrumis in many ways Skolnick’s most intimate record yet. It is the trio’s first new studio album since 2011’s Veritas, and it features original music almost exclusively, with six compositions by Skolnick, one apiece by bassist Nathan Peck and drummer Matt Zebroski, and a gorgeous interpretation of Erik Satie’s “Gymnopédie No. 1.”

Far removed from the musical tunnel vision of “guitar” or “shred” albums, Conundrum reflects Skolnick’s wide-ranging knowledge as a player and, even more important, as a listener. “What would I want to hear, regardless of the instrument and regardless of technique?” he asks. “That’s the type of music I try to create as an improviser and composer.”

The multi-layer, multi-section songs that resulted are, in a word, sweeping - and include plenty for guitar heads to dig into after all. Skolnick’s “Unbound,” part of which originated on piano, kicks off Conundrum with springy slapped harmonics. Beautiful chordal work follows, as well as soloing that lays out the guitarist’s m.o. as a lead player: to tell a story by varying his attack, tone, intensity and harmonic approach with masterful control.'

Born in 1968 and raised in the Bay Area, Skolnick was still a teenager when he made heavy-metal history on Testament’s essential debut, The Legacy. The band remained a major touring act in heavy music. Most recently Testament has been hitting arenas and amphitheaters as part of Slayer’s blockbuster Final World Tour.

Skolnick immersed himself in jazz at Manhattan’s venerable New School. It was there that he dug even deeper into recordings by Miles, Trane, Wes, Jim Hall, Scofield, Metheny and more; studied with jazz greats like saxophonist George Garzone and bassist Reggie Workman; and formed his trio, which debuted on record in 2002 with Goodbye to Romance: Standards for a New Generation.

And while Testament continues to thrive, it’s the trio and its repertoire that Skolnick can see growing old with. “These days I still love playing screaming, loud guitar and heavy metal, though I don’t think I’m going to be one of these guys who’s past social-security age and in a rock band and touring,” he says. “But I can see myself doing these songs with the trio for many years to come.”

Conundrum is available on vinyl, CD and all streaming services. Order here.