TEXAS HIPPIE COALITION To Release Dark Side Of Black Album In April; US Tour Dates Announced 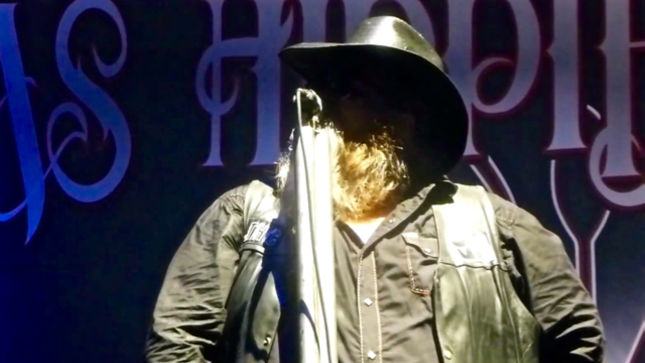 After reaching a new level of recognition with their last album, Ride On, and a position on the 2014 Rockstar Energy Drink Mayhem Festival, gritty southern metal four-piece Texas Hippie Coalition are back with their fourth full-length Carved Records album, Dark Side Of Black, to be released on April 22nd.

Embracing southern roots while exploring a heavier sound than ever before, Dark Side Of Black achieves a murky, groovier feel while not straying too far from THC's tried and true brand of rugged outlaw rock. Pre-orders for Dark Side Of Black begin today and are available here.

Dark Side Of Black was recorded at Boot Hill Studio in Corinth, TX and Valve Studios in Dallas, TX with producer Sterling Winfield (Pantera, Hellyeah, Damageplan).

"Dark Side Of Black is our heaviest album to date for sure," states THC vocalist Big Dad Ritch. "We've learned a lot having made four full-length albums prior. We're trying to use that knowledge we learned to make an album that can maintain what Ride On and Peacemaker bring to the table, yet we wanted it to lend itself more to the power that is the RED DIRT METAL of Rollin and Pride of Texas. So it feels like Pride meets Peacemaker. Top shelf THC meets bottom shelf liquor..."

Although Texas Hippie Coalition are experts at their trade, recording Dark Side Of Black wasn't easy at times. THC drummer Timmy Braun comments on his physical struggle while recording the album, having just recovered from a serious infection shortly beforehand. He feels, perhaps, that this struggle influenced his recording style overall.

"About Dark Side Of Black, I have never had such a difficult time completing an album in my life," begins Braun. "I say that because my first session I had just got out of the hospital. It was difficult for me to walk let alone play a drum kit. After being in bed for literally two weeks I felt a bit out of shape. Then for the second session my hand was swollen to almost twice its size because of an injury! I couldn't make a fist let alone play a drum kit. However, I'm hoping the vibe I was able to create will have a special flavor that I wouldn't have been able to offer had my life been in order, per say. In other words, tough times make for better art!"

Guitarist Cord Pool adds, "Between tweaking our writing style and being influenced by personal things, Dark Side Of Black leads the listener a step closer to the darker and heavier side of what we have to offer." 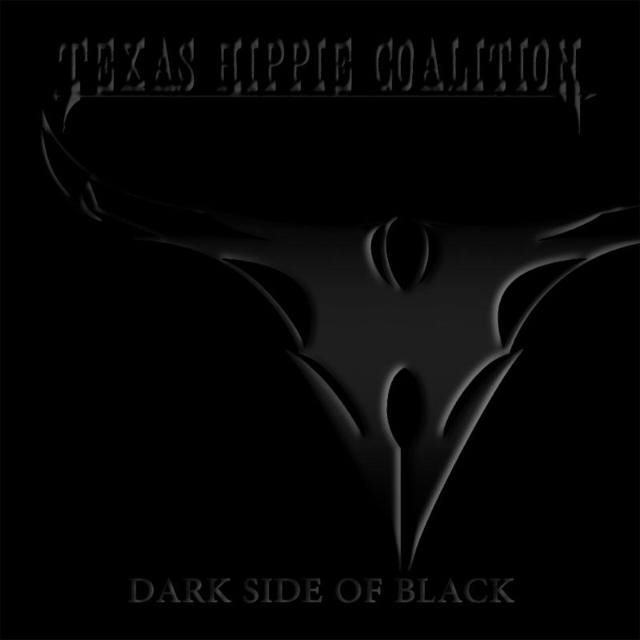 Dark Side Of Black tracklisting:

In celebration of the album's release, Texas Hippie Coalition will venture out on a US headline tour with support from fellow Texas namesakes and natives Sons Of Texas. The Dark Side Of Black tour will begin its first leg on April 29th in Shreveport, LA and visit a total of 26 cities before ending at River City Rockfest on May 29th. The tour will include five spring festival stops (these will not include Sons Of Texas). Before the tour, the band will perform two headline dates, one of which will act as their official album release party.

Tickets for the first leg of the Dark Side Of Black tour go on sale this Friday, February 26th at 12 PM, ET, here. 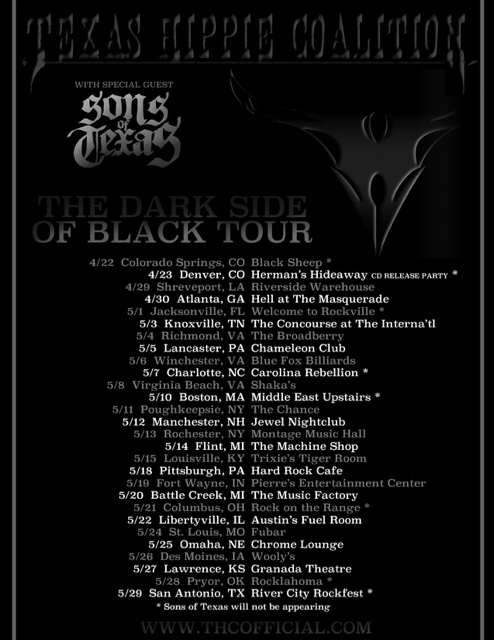 Find the band’s complete tour itinerary at this location.