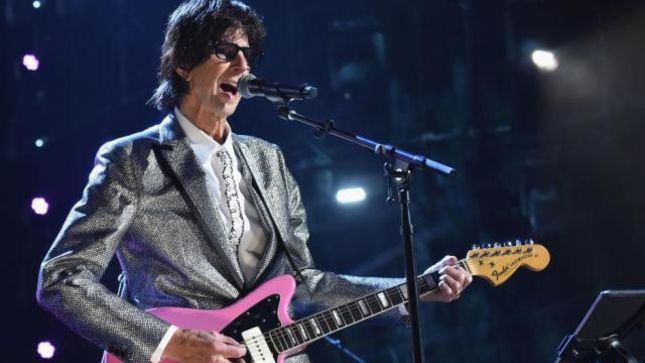 Ric Ocasek's family is opening up about the death of The Cars frontman, reports Susan Haas of USA Today.

In a statement released Monday, Paula Porizkova, the rocker's wife of nearly 30 years, said the rocker died "peacefully" in his sleep.

"Ric was at home recuperating very well after surgery," Porizkova, said in an Instagram post. "I found him still asleep when bringing him his Sunday morning coffee. I touched his cheek to rouse him. It was then I realized that during the night he had peacefully passed on."

The Office of Chief Medical Examiner in New York concluded that Ocasek, age 75, died of natural causes, determining that hypertensive and atherosclerotic cardiovascular disease was the cause of death, with pulmonary emphysema a contributing condition.

Ocasek and The Cars were inducted into the Rock & Roll Hall of Fame in 2018.

In an interview with Rolling Stone magazine ahead of the band's induction into the Hall of Fame, Ocasek described playing there as "a good cap on the bottle" after so many years.

"It's kind of weird because it's like a lifetime," Ocasek told the magazine, looking back at the history of The Cars. "It is a lifetime. I had three families during that time. They are like lives that go by and millions of people and things and artists and writers and business people and fans. ... It's a lot of stuff. It's been a pretty eventful life, I can say."

The Cars were at the forefront in merging 1970s guitar-oriented rock with the new synthesizer-oriented pop that was then becoming popular and which flourished in the early 1980s. Robert Palmer, music critic for The New York Times and Rolling Stone, described the Cars' musical style by saying "They have taken some important but disparate contemporary trends—punk minimalism, the labyrinthine synthesizer and guitar textures of art rock, the '50s rockabilly revival and the melodious terseness of power pop—and mixed them into a personal and appealing blend."

The Cars were named Best New Artist in the 1978 Rolling Stone Readers' Poll and won Video Of The Year for "You Might Think" at the first MTV Video Music Awards in 1984. Their debut album, The Cars, sold six million copies and appeared on the Billboard 200 album chart for 139 weeks. As of 2001, the Cars have sold over 23 million albums in the United States.

The band broke up in 1988, and Ocasek stated that a reunion would never happen. Orr died in 2000 from pancreatic cancer. The surviving original members reunited in 2010 to record a new album, Move Like This, which was released in May 2011, followed by a short tour.

In April 2018, the Cars were inducted into the Rock and Roll Hall of Fame, and reunited once more to perform at the induction ceremony. The reunion was their final performance with Ocasek.