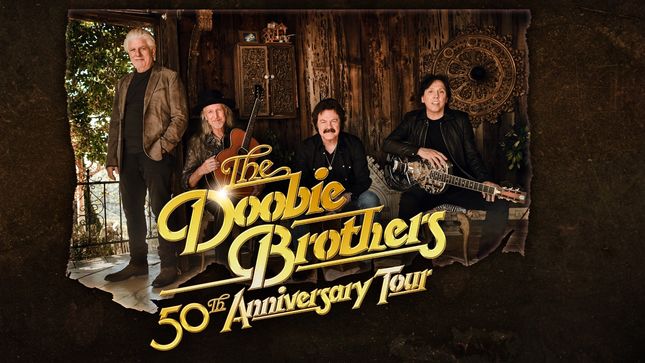 The Doobie Brothers have announced 23 additional dates for The Doobie Brothers 50th Anniversary Tour. The dates were added in response to overwhelming fan excitement following the band’s surprise announcement at Ryman Auditorium on November 18 that Michael McDonald will be joining the group on a North American tour. Four-time Grammy Award winners and Rock & Roll Hall of Fame nominees Tom Johnston, Michael McDonald, Pat Simmons And John McFee will be touring together for the first time in nearly 25 years.

Tickets to The Doobie Brothers 50th Anniversary Tour will go on sale to the general public beginning Friday, December 6 at 10 AM, local time at LiveNation.com. Tickets for the performance at Soaring Eagle in Mt. Pleasant will go on sale on December 21. A limited number of LaneOne Premium Packages will also be available, including amazing seats, transportation, preferred entrance and more. Check here for LaneOne details.

“Next year our tour will include Tom, John, and myself, along with Michael McDonald, and the fans will have a chance to hear all our hits, as well as deep cuts, and new material. I know these will be very special performances,” said Pat Simmons.

Selling nearly 50 million albums worldwide, The Doobie Brothers have had five top-10 singles, 16 top-40 hits, 3 multi-platinum albums, 7 platinum albums, 14 gold albums and own a rare diamond record for their 1976 album, Best of the Doobies. The Doobie Brothers’ collection of timeless hits will once again be played by the artists who wrote them, providing fans the rare opportunity to see these Rock and Roll legends performing their full catalog of songs on stage.
Fans who attend The Doobie Brothers 50th Anniversary Tour can expect to hear a wide range of the band’s hit songs, including “Listen To The Music,” “Takin’ It To The Streets,” “Long Train Running,” “Black Water,” “What A Fool Believes,” “China Grove,” “Minute By Minute,” “It Keeps You Runnin’,” “Jesus Is Just Alright With Me” and many more.