THE WHO Honoured With The First Stone On The Music Walk Of Fame, London; Photos, Video 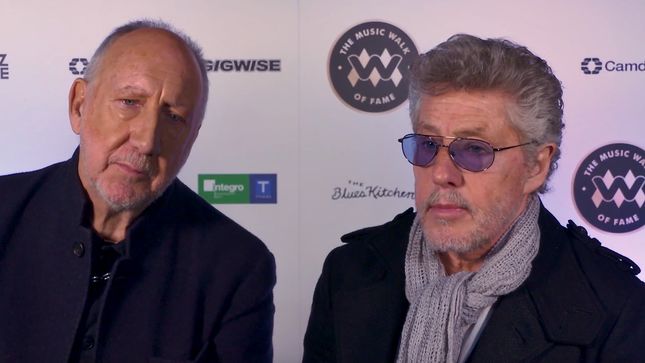 The Who have been honoured with the very first stone on the new Music Walk Of Fame in Camden, north London. In a ceremony held November 19 in Camden High Street, the band were introduced to the crowds who thronged the pavements by Bobby Gillespie of Primal Scream and Lee Bennett, founder of the Music Walk Of Fame. Pete Townshend and Roger Daltrey, accompanied by Chris Entwistle, son of the late John Entwistle, unveiled the granite plaque set in the pavement outside Camden Town tube station.

In a statement, Roger and Pete said: “We are honoured to be the first band with a stone on the Music Walk Of Fame. Camden has always been vital to London’s thriving music scene and is, as we all know, a world-renowned hub for the arts. As Londoners, it’s very surreal to be immortalised in stone on Camden High Street, and it’s quite something to know that people can pop by and see us anytime, albeit virtually.”

Read the full story and see more photos at TheWho.com. Video from the event can be seen below:

Now 55 years after they made their first recordings, The Who are back with their first new album in thirteen years, entitled WHO, due for release tomorrow, Friday, November 22, via Polydor Records. Pre-order WHO here.