TOOL Bassist JUSTIN CHANCELLOR Talks Making Of New Album - "There Was A Great Body Of Work That We Were Working On; A Bunch Of It Didm't Make It" 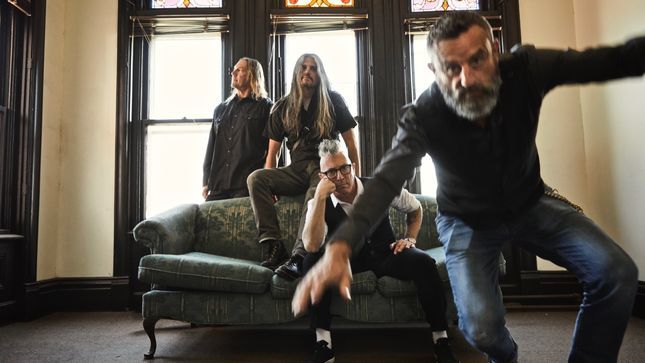 In the latest episode of Striking A Chord, Tool bassist Justin Chancellor talked about the release of their brand new and long-awaited album, Fear Inoculum. Justin discusses the band’s unique songwriting process, his thoughts on finally releasing their music on streaming services, how he initially turned down the offer to join Tool, and much more.

Q: There have been a few announcements through the years that the album is almost done. Were there times that you were actually close?

Justin: "At times, it felt like we were on the way. Just so you understand, there were never full songs written, but there was a great body of work that we were working on, some of which followed through into what we have now, but a bunch of it didn't make it. As a whole body of work, we were kind of working on these piles of ideas at the same time. We all see it differently, but you start to have an image of how the whole thing is going to look if you could make it into an image or a landscape. And I know for myself, I would get really excited, but other people have different ideas, so maybe that was a different way that we worked that didn't work. It was just different, and I think it was almost like we had to get back to basics a few times. Like, 'Let's just concentrate on one thing, who likes what? Which idea are we all into? Okay, let's start working on that,' after having a month away from each other (laughs)."

The news of Fear Inoculum’s impressive debut comes amidst news stories of the album release being met by lengthy lines at retailers as music lovers clamored to get a copy of the limited edition, physical version of the CD. The spectacular, groundbreaking packaging boasts a 4” HD rechargeable screen with exclusive video footage, charging cable, 2 watt speaker, a 36-page booklet and a digital download card. The Coalition of Independent Music Stores (CIMS) released a rare statement, describing the event-like album release: “Several stores had well-attended midnight sales on Thursday (it was my store's first midnight sale in 10 years). When we returned to work on Friday morning, there were lines at the door… the Tool release was the biggest thing to hit retail in years.”

The success wasn’t isolated to the U.S., with the album debuting at #1 in Australia, Norway, New Zealand, and Belgium, as well as Top 5 debuts in the UK, Germany, The Netherlands, Ireland, Italy and Finland.

Tool have announced a six-week North American tour, launching on October 13th at the Aftershock Festival. Tickets are on-sale now. Further information, as well as VIP package details, can be found via Toolband.com.