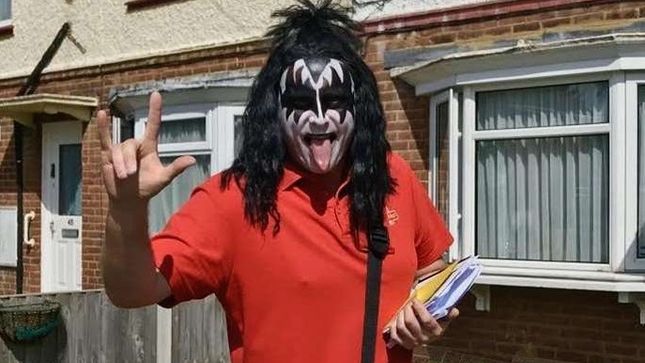 A postman has been bringing some cheer to customers cooped up at home during the coronavirus pandemic by doing his rounds mimicking Gene Simmons of rock band KISS, reports KentOnline.

Gary Underdown has been delivering letters and parcels to people’s homes on Sheppey, UK while donning Simmons’ statement make-up and wig. His efforts have been a hit amongst Islanders and on social media after Gene retweeted a photo of the 32-year-old glam rock fan on one of his rounds.

The photo was first shared by the official KISS Twitter account to its 1.5 million followers, before it was retweeted by Gene, along with the caption “Wow”. Since then, it has been shared thousands of times and the postie has received an outpouring of support.

Gary, who lives in Rainham and has been a postman on Sheppey for two-and-a-half years, said: “My phone went crazy. I couldn’t believe how crazy it went."

"I have been a KISS fan since I came out of the womb,” he joked.