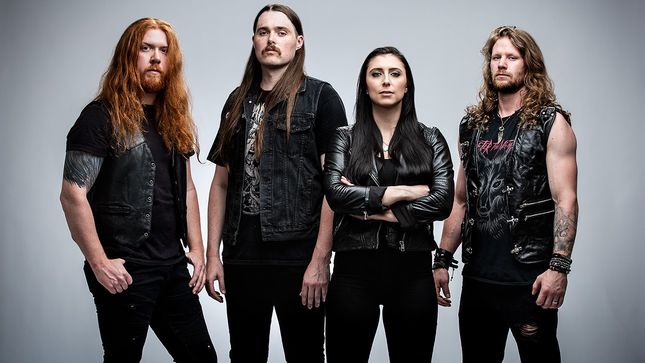 Unleash The Archers released their Explorers EP earlier this month via Napalm Records.

In “Heartless World”, the band show the world what they are made of. The band manages to give the original glam metal track by Teaze an unexpected, modern power metal twist. Combining that with an astonishingly wide range of vocal melodies, Unleash The Archers surprise and bewitch the listener yet again. A clean guitar intro makes you feel almost melancholic, but when the second chorus hits, at the very least, you’ll be tapping your foot. “Heartless World” describes how everything can become too much from time to time, and that sometimes all you need is to unplug and recharge your energy.

Says the band: "The second single is a cover of a song by a Canadian hair metal band from the 80's called Teaze. They are not super well known, but that's why we gravitated towards them. The song 'Heartless World' has a really interesting arrangement and can't seem to decide if it's a ballad or a rock opera. Unlike 'Northwest Passage', where we played around with it quite a bit, we left 'Heartless World' almost completely as is, and only changed a few small things like solos and vocal melodies. We thought it would be a great companion piece to 'Northwest Passage' and really round out the moody Explorers vibe.”

Watch the lyric video accompanying the single below and lose yourself in an FM headphone high:

The artwork for Explorers was created by Dusty Peterson and Unleash The Archers are very happy with it: “We feel it captures the essence of seeking the ‘Northwest Passage’ perfectly. If you have ever read 'The Terror' by Dan Simmons or watched the show you'll know exactly what we were going for. This EP has darkness written all over it, but the songs themselves have a slightly uplifting undertone as well. One can only imagine how exciting it must have been to explore this unknown continent back in the day, but also, how terrifying.”

Explorers can be ordered here.