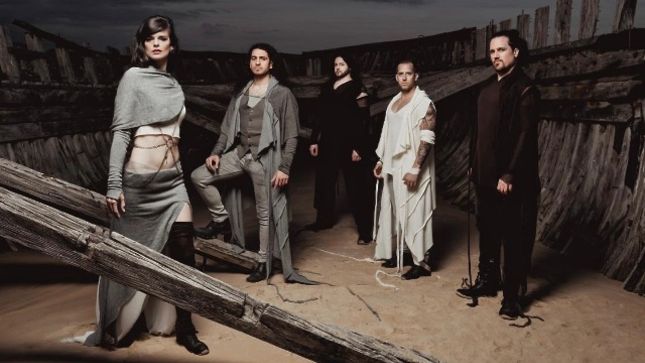 Visions Of Atlantis has entered the charts worldwide with their newest successful opus, Wanderers. The new album even topped the chart-breaking The Deep & The Dark (2018), and the Austrian-French-Italian five piece continues their way to the top. See the chart entries below:

Visions Of Atlantis released their spectacular seventh album on 30th August via Napalm Records. On Wanderers, Visions Of Atlantis unfold their unique concept that transcends the stylistic approach of symphonic metal with songs as Heroes of the Dawn or lyrical Nothing Lasts Forever, highlighting the power of spectacular vocal duets by Clémentine Delauney and Michele Guaitoli.

With each track, the listener will be blown away by captivating symphonic metal songs, exploring sides of the group the listener might yet not be familiar with. Visions Of Atlantis truly take the next step with this release, starting with a photoshoot on the shores of the North Atlantic that resulted in breathtaking pictures, lyrics that touch the heart and soul, and riffs that will take you on a journey to the world unknown.

Wanderers is available as strictly limited Earbook edition, including 48 pages of pure Visions Of Atlantis art, a bonus CD and an exclusive 7’’ vinyl. Singer Clémentine Delauney shows you what this all includes in this video:

Bonus tracks:
"Bring The Storm"
"In And Out of Love"

"Heroes Of The Dawn" lyric video:

!A Journey To Remember"

End of August starts the album release tour through Germany and Austria, before they hit the road with Freedom Call. Don’t miss the breathtaking show, including songs of the new album Wanderers.