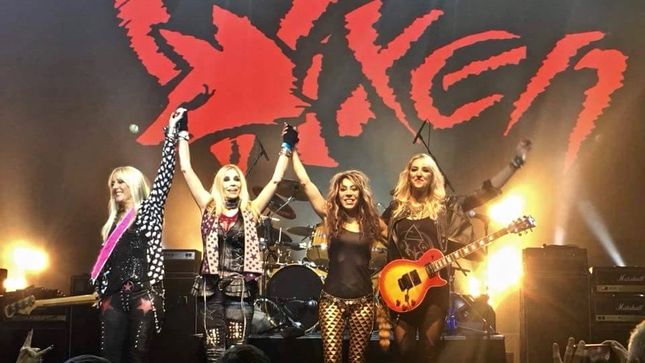 Says Vixen: "Waiting for the Big One”!?!??! Then wait no more! Show some love and support for Hurricane Lorraine Lewis! Back with Vixen to take care of some unfinished business!"

Lewis previously performed with Vixen in March 2018 in Oklahoma, while Janent Gardner was recovering from surgery. Video can be seen below.

Vixen issued this statement following Janet Gardner's announcement that she was leaving the band. "Janet felt the time was right to pursue a solo career and devote more time to family. We respect Janet's bold and courageous decision to leave Vixen and we'll always cherish the memories and music we made together as Vixen.

"Moving forward as a band we tip our hat to Van Halen who has two of the most recognizable frontmen in rock 'n roll; Diamond David Lee Roth and the Red Rocker Sammy Hagar! With our new lead singer, we too will expand upon the Vixen legacy while remaining true to our musical roots."

Janet Gardner issued the following statement: “After much soul searching and many sleepless nights, I have decided that it’s time for me to step aside and let Roxy (Petrucci, drummer) and Share (Ross, bassist) pursue their vision for the future of Vixen. Vixen will always have a very special place in my heart and I am incredibly grateful to have been a part of it. I would like to thank everyone for the amazing support over the years, and as Roxy and Share continue to keep the heart and soul of Vixen alive and well and I continue on my path, your continued support to all would be greatly appreciated. Love, Janet.”