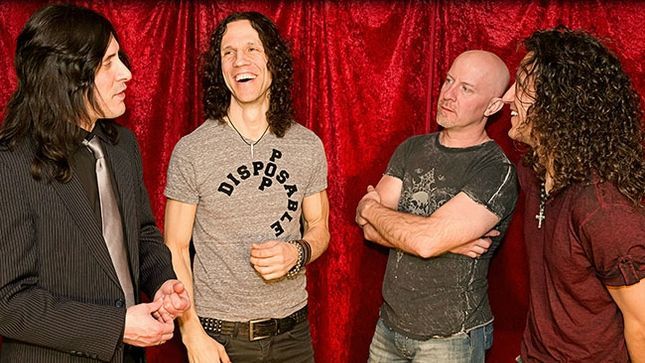 Extreme frontman Gary Cherone is featured in a new interview with BraveWords scribe Carl Begai discussing his other band Hurtsmile and their new album, Retrogrenade. An excerpt from the story is available below:

Cherone has gone on record as saying that people who are into Extreme will find Retrogrenade to their liking for the simple fact it has the same eclectic qualities of Extreme’s early albums. The trick, of course, was to make sure Hurtsmile didn’t come off sounding like an Extreme clone. Not an easy task when Cherone has a trademark sound.

“It’s funny you say that because during pre-production or a writing session I’ll come up with something, and those guys will go ‘It sounds like Extreme.’ They’ll mention which Extreme song it reminds them of and I’ll look at them and go ‘Really?’ and then I’ll laugh about it. I can’t help it.”
“For me it’s who I write with that makes things different from Extreme, whether it’s with Mark or collaborating with someone like Eddie Van Halen. I’m bringing mysel to that collaboration and that’s the difficult part. It’s usually a concensus that edits out any Extreme elements, whether it’s a harmony thing or whatever, that we may want to move away from, but it’s not usually a make-or-break thing.”

Given the quality of Cherone’s songwriting, it would be foolish to simply dismiss material out of hand because something sounds like it would fit on an Extreme album.

“Exactly, and it would inhibit me because I’d be second-guessing myself. I’d be having conversations with myself about what works and doesn’t work in Hurtsmile, and that would inhibit the songwriting process. Joe worked with Nuno, Mark stole my record collection as a kid (laughs), so how we write is almost second nature. When I was working with Van Halen, I was the outsider looking in. With Hurtsmile or Extreme we’ve got 25 or 30 plus years together. Nuno (Bettencourt) always knows when I’m in a bad mood and vice versa. I grew up with Mark, and I guess maybe that’s the secret of the success of the band when it comes to songwriting.”
“The new record is Hurtsmile creating an identity apart from it being a Gary Cherone project. This is a band. You pointed out the hooks and some of the pop elements people heard on the early Extreme records. When people hear Extreme they might here elements of Van Halen and Queen – which are obvious influences – but maybe they never heard of Cheap Trick, which is something that turns up on this record. Even the Eagles reference, which is gratifying to me when people bring that up. Not that we’re trying to copy them, but mission accomplished trying to bring some of those influences out.”

Retrogrenade is best described, at least to these ears, as III Sides To Every Story meets Led Zeppelin.

“That’s humbling because of what Zeppelin represents, and I think III Sides is the pinnacle of Extreme.”