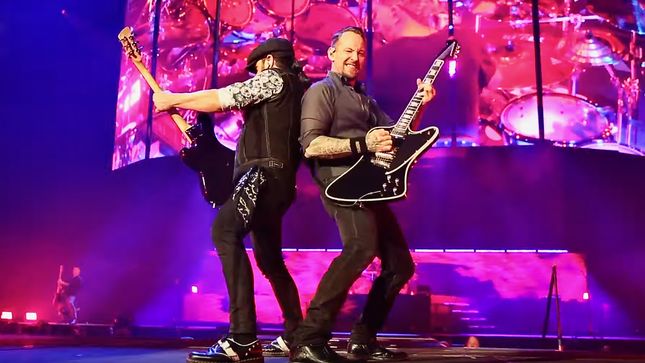 Volbeat have released a new Rewind, Replay, Rebound tour recap video. Says the band: "Danke Hamburg for having us for 2 nights! We are still smiling 😈 from how much fun we had!"

The itinerary for Volbeat’s Rewind, Replay, Rebound World Tour can be found at this location.

Volbeat recently debuted their new music video for “Die To Live”, directed by Adam Rothlein at Ghost Atomic Pictures and taped at Futura Studio in Roslindale, MA. The song and video both feature appearances by Clutch’s lead singer Neil Fallon, as well as Raynier Jacob Jacildo and Doug Corcoran of JD McPherson’s band. The video, as well as behind-the-scenes footage, can be seen below:

The album was produced by long-time collaborator Jacob Hansen and co-produced by Rob Caggiano and Michael Poulsen. This marks the first studio album with Kaspar Boye Larsen on bass. Ultimately, Volbeat have not lost their passion to create and progress. It’s that which keeps them hungry - and musically honest on the new album.