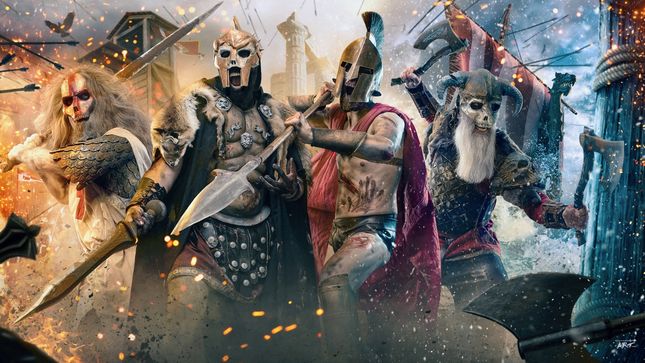 "We ride the thunder, lightning is our sword, the blaze across the Eastern sky, keepers of the call - Forevermore."

Warkings Warriors... prepare yourself! A new crusade arises with the mighty Warkings and their new album Revenge, to be released via Napalm Records on July 31.The band enters the battleground and faces ghoulish demons with the formidable weapon made of pure heavy metal. The four ancient kings, a roman Tribune, a wild Viking, a noble Crusader and a martial Spartan, gathered in the halls of Valhalla, escape from the realms of obscurity and steal their souls from the Lord of the Abyss. In a bloodthirsty furor, the demons seek revenge on the Warkings but Odin’s legates are more than ready to vanquish the Monarchs of the dusk with their hard-hitting anthems. Folklore-like elements like the opener “Freedom”, the death angel’s chant “Azrael” or the epic hymn “Warriors” prove the Warkings’ uncompromising vigor.

In order to sweeten the wait for Revenge, the Warkings present their first single, “Warriors”, today. This battle hymn is made of pure heavy metal: straight forward riffs, sing-along lyrics and attacking drums pay tribute to the Order of the Dragon, including their most known member Vlad “Dracula” Tepes! Accompanied by a fast-paced official video, featuring a beautiful scenery and the epic story of a battle well-fought, this track will sweep you off your feet.

The Tribune on “Warriors”: “Hell wants revenge... so we will fight fire with fire. We forged an alliance with the order of the dragon and the infamous Vlad Tepes.”

Watch the official video for “Warriors”  below.

Warkings - Revenge: Once, there were four ancient kings who gathered in the golden halls of Valhalla, a roman Tribune, a wild Viking, a noble Crusader and a martial Spartan. They were sent back to the living by the allfather himself to tell the stories of the epic battles they fought. It turned out to be a great time for the Warkings, striking the world with their battle hymns. Keen of new adventures they made their way through the land of the living. But as the fame of the four kings rose, the envy and hate of the Underworld grew. When the four kings escaped from the realms of darkness, they stole their souls from the lords of the Underworld. In rage, bloodthirsty demons and warriors swarmed out to retrieve what belonged to them, seeking for revenge on those who betrayed them. But the kings strike back. Leading the constantly growing legion of their Warkings Warriors, they will enter the eternal fight against the darkness. Armed with new hymns and with a mighty battle cry, they will put themselves against the forces of the underworld. Hell wants revenge...and the Warkings are ready for battle.

The Crusader on Revenge: “We are back to crush the armies of the underworld with steel and battle axe. Join us…we need you battle cry!!!”

Revenge will be available in the following formats: