WHITESNAKE Guitarist JOEL HOEKSTRA Talks Being A Member Of TRANS-SIBERIAN ORCHESTRA - "What Do I Have To Be Unhappy About?" 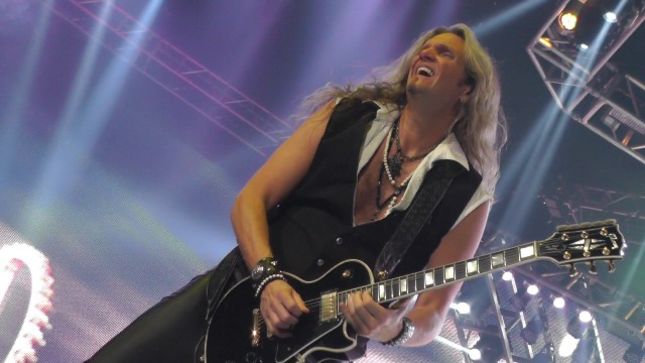 Whitesnake guitarist Joel Hoeskstra is featured in a new interview with The Charlotte Observer alonsgtide Trans-Siberian Orchestra bandmate Mee Eun Kim, who has played keyboards off and on for TSO for two decades. Following is an excerpt from the story.

“I knew that TSO was hugely successful, and I knew some of the people in the band. But I had never seen a show when I got the gig.”

Nine seasons in, he feels like part of one big, noise-making family. “This is my holiday tradition,” says Hoekstra, whose off-season touring jobs now include playing lead guitar for Whitesnake and Cher. “It’s hard to explain, but I would feel really, really strange not doing TSO come holiday time.”

It’s an image of Hoekstra, by the way, that you’ll see first if you do search for Trans-Siberian Orchestra on YouTube. He’s in silhouette, down on one knee, the neck of his electric guitar pointed skyward, and his head thrown back so that his blonde mane cascades behind him, catching the glow of the spotlight just right. It’s one of a variety of ways in which he likes to ham it up on stage.

And when he’s not striking a guitar-hero pose, you’ll often catch him smiling — at fans, at fellow band members, and sometimes, for who knows what reason.

“That’s not feigned or fake in any way, shape or form,” Hoekstra says. “Look, I feel happy to be alive, and I feel happy to be healthy. These are things that I check in with every day. So it starts with the basics. Then to be actually standing with a guitar, doing what I love, what I set out to do when I was a kid, for thousands of people, with my friends, playing music that I enjoy ... I mean, what do I have to be unhappy about?”

The Trans-Siberian Orchestra has posted a video teaser for their curent tour, which features the return of Christmas Eve And Other Stories. CHeck it out below.

"We are here in the midwest preparing to give you one of the most exciting TSO productions you have ever seen. During rehearsal, Russell Allen slipped and fell. Russell is in good spirits but in a bit of pain. We are doing everything necessary to assure Russell is taken care of. We hope he is able to make it out on the road in the near future but our concern is that he rests so he can make a full recovery."

A product of the vision and imagination of TSO’s late founder/composer/lyricist Paul O’Neill, Christmas Eve And Other Stories began the unique format O’Neill called “Rock Theater” and forged a deep connection with their fans that it turned into the wildly-successful tour, cementing the group’s status as a must-see, multi-generational, holiday tradition and kick-started the trend of Yuletide season tours. This year’s multi-sensory extravaganza will visit 66 cities for 109 performances across North America (see full itinerary below and online).

Christmas Eve And Other Stories is based on the triple-platinum album of the same name and follows a story by TSO’s late founder/composer/lyricist Paul O’Neill. In keeping with the classic line “If You Want To Arrange It, This World You Can Change It,” the story is set on Christmas Eve when a young angel is sent to Earth to bring back what is best representative of humanity. Following favorite TSO themes of “strangers helping strangers” and “the kindness of others,” Christmas Eve And Other Stories takes listeners all over the world to help reunite a young girl with her distraught father. The album and tour feature such fan-favorites as “Ornament” and the epic “Old City Bar,” both of which have not been performed live in recent years. The rock opera also features such TSO classics as "Christmas Eve/Sarajevo 12/24," "O’ Come All Ye Faithful," "Good King Joy," "Promises To Keep," and "This Christmas Day." Additionally, the tour will enjoy a new second set containing some of TSO’s greatest hits and fan-pleasers including "Christmas Canon," “Wizards In Winter” and many more.

Since its historic touring debut, TSO has played nearly 2,000 Winter Tour shows for more than 16 million fans, with tour grosses of more than $725 million, and has sold in excess of 12 million albums and DVDs. Year-after-year TSO hits the upper reaches of the domestic and worldwide tour charts. Recently in July 2019, TSO was ranked No. 6 on Pollstar’s North American Tours Mid Year chart and No. 8 on Pollstar’s Worldwide Tours Mid Year chart. In 2018, TSO came in at No. 16 on Pollstar’s 2018 Top 200 Year End North American Tours and at No. 17 on Pollstar’s 2018 Year End Worldwide Ticket Sales Top 100 Tours chart with more than 925K tickets sold. Additionally, in July 2019, TSO was featured in Billboard’s Money Makers of 2018. In 2009, Pollstar ranked TSO at No. 20 on the “Top Tour(s) of the Decade” and Billboard placed TSO at No. 25 on its “Top Touring Artists of the Decade.”

Always embracing the O’Neill’s sense of altruism, TSO remains one of rock’s most charitable bands. This year, as in years past, TSO will give at least $1 from every ticket sold to charity – to date approximately $16 million has been donated by the group.