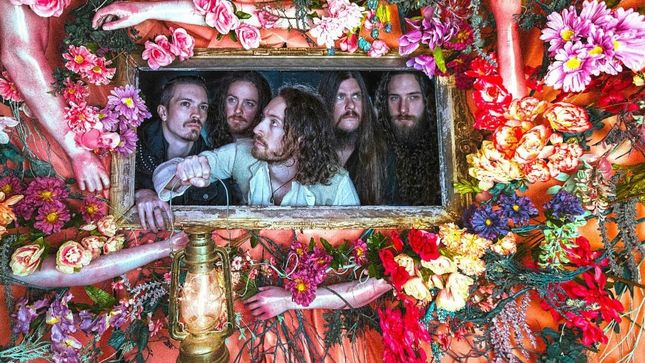 Epic progressive metal band Wilderun has revealed the first single from the upcoming Veil Of Imagination album, "Far From Where Dream Unfurl."

"'Far From Where Dreams Unfurl' is one of the more melodic, upbeat tracks from the album," says vocalist/guitarist/pianist Evan Anderson Berry. "We've been playing it at shows for a while now, and it's one of the most fun songs to play live.  It began as a much more stripped-down folk track, originally written just on acoustic guitar, but we kept developing it and adding to it until it progressed to an eight-plus minute piece.  Some of it harkens back to our first album, melodically, but takes more structural influence from our second, resulting in something that feels pretty new to us. Lyrically, this song talks about a man who obsesses himself with tasks and goals, viewing life through a lens of accomplishment, and slowly realizing that he's just distracting himself from his own inability to be content with life."

With elements of progressive metal, folk and orchestral music providing a dynamic backdrop, Veil of Imagination takes listeners through vivid, emotional landscapes, while the lyrics weave tales that are simultaneously fantastical and personal.

Berry says, "Lyrically, this album is a bit of an uncomfortable look into my own neuroses. Not so much its manifestations in real life but more of a third-person perspective on the mechanics of a brain trying to interpret the world through reason and understanding...and usually coming up short."

Formed in 2012, Wilderun has previously released two albums, 2012's Olden Tales & Deathly Trails and 2015's Sleep at the Edge of the Earth. With this slightly different approach to creating music, Veil of Imagination transforms and expands upon Wilderun's already indefinable style, resulting in an album that is at once beautiful and fierce. Clean vocals transform into deathly growls as the band alternates between exquisitely-composed orchestrations and savage metal, all executed with technical prowess.

Veil Of Imagination is a stunningly epic, emotional and whimsical odyssey through landscapes of earth and mind.

Veil Of Imagination was recorded at More Sound Studios in Syracuse, NY, during February and March of 2018. The album was produced by Wilderun, Justin Spaulding and Andrew Greacen. Veil of Imagination was mixed by the legendary Dan Swanö and mastered by Jens Bogran.

Information on pre-orders is forthcoming.

“The Unimaginable Zero Summer”
“O Resolution!”
“Sleeping Ambassadors Of The Sun”
“Scentless Core (Budding)”
“Far From Where Dreams Unfurl”
“Scentless Core (Fading)”
“The Tyranny Of Imagination”
“When The Fire And The Rose Were One”

"Far From Where Dreams Unfurl":

Wilderun has scheduled select live dates around the release of Veil Of Imagination: