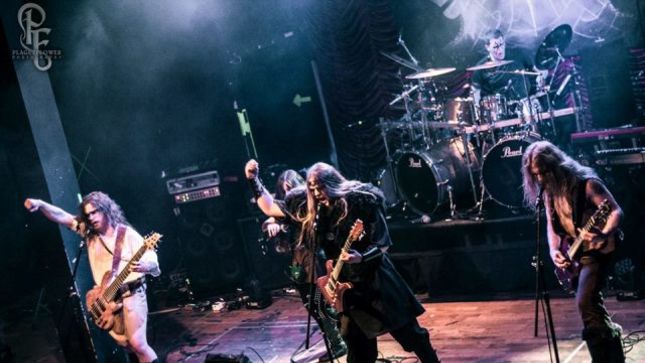 American heathen metal overlords Winterhymn have unveiled the artwork, track list, and a preview of the track “Dream Of Might” from their sophomore album Blood & Shadow, which is currently in the final stages of production at Hofmann Studios in Germany.

The twelve-track saga follows their 2011 debut Songs For The Slain. The album is comprised of never-before-heard material, as well as four songs fans will recognize from their 2014 Paganfest Sampler EP released in conjunction with their North American tour with Korpiklaani, Turisas, Chthonic, and Varg.

“The only issue we’ve encountered with the title ‘folk metal’ is that it’s one that’s very resilient to change,” says violinist Umbriel. “Many people have a fixed conception of what that means – what’s allowed and what isn’t. With this album we’re hoping to help change that.”

The preview of “Dream Of Might” showcases a distinct shift in the band’s sound. “It’s straightforward, barbaric metal with half the pomp and twice the balls,” adds singer/guitarist Draug. “It’s darker and more expressive, without sacrificing any of the guts and glory. It’s the purest our voice has ever been and speaks to what we are: A metal band that made a folk album, not the other way around.”

Blood & Shadow was tracked by Audiogrotto (drums) and Sam Curtis, and is mixed and mastered by André Hofmann (Wolfchant, Varg, Nothgard). The artwork for the album was created by Vasilis Zikos (Mael Mordha) and reflects a scene from Winterhymn’s personal mythos, which the album is entirely based upon.