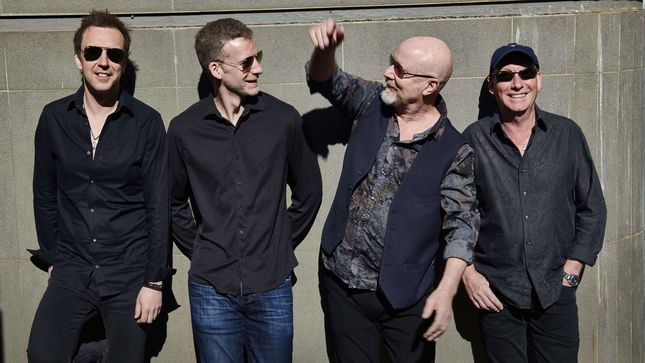 Wishbone Ash celebrates a half-century of live twin-lead guitar power in 2020. Fans can look forward to enjoying repertoire from the band's vast catalog of exactly 100 unique releases - 27 studio albums, 24 live albums, 43 compilations and box sets and five live DVDs, along with a DVD rockumentary (This is Wishbone Ash). Continually pushing their creative process, the band will release their next studio album, Coat Of Arms, through SPV/Steamhammer on February 28.

The first leg of the 50th anniversary tour in the US begins in Melbourne, FL on Feburary 15, traversing the country's Southern swath from Florida to California and up the Pacific Coastline. The band will return for a Fall Tour in the Northeast and Midwest.

In the annals of rock music, there have been few bands with a lasting stylistic influence who continue to be active to this day and are celebrated at their shows not only for their past accomplishments but who continue to impress their fans with new albums, new songs and fresh ideas at regular intervals. Wishbone Ash certainly count among this rare species.

Almost precisely fifty years ago this month, the group surrounding guitarist/vocalist Andy Powell first caught attention with the release of their debut album Wishbone Ash (1970). Two years later, they went on to write music history with their third release Argus, and since then Wishbone Ash have brought out more than two dozen outstanding studio and live recordings, among them classics such as Live Dates (1973), There's The Rub (1974) and New England (1976), as well as more recent gems such as The Power Of Eternity (2007) and Elegant Stealth (2011).

Their latest release, Coat Of Arms, forges an arc to all these offerings, featuring Wishbone Ash’s characteristic twin lead guitar parts, their haunting melodies and diverse stylistic facets,while at the same time imbuing the scene with a breath of fresh air.

Coat Of Arms sounds stylistically diverse and technically accomplished, yet the new album is typical of Wishbone Ash’s traditional strengths - a balancing act that is a challenge to Andy Powell every time: “Following the countless songs that we have written throughout the history of Wishbone Ash, my own expectations are extremely high. On the one hand as a composer you try not to repeat yourself in your creative output but to come up with new ideas all the time, on the other you want to remain faithful to your style. Good songs need an inner conviction and the right inspiration. We had both when we started working on Coat Of Arms. You’d be right in describing the current line-up as the best in the history of Wishbone Ash. We all love our lives as musicians, the direct contact with our fans, travelling, the shows, our songs. It’s that commitment by everybody involved that you hear in every single note on Coat Of Arms.”

Coat Of Arms will be released through SPV/Steamhammer on February 28 on CD DigiPak, 2LP (incl. bonus track), download and stream. Pre-order here.

"We Stand As One"
"Coat Of Arms"
"Empty Man"
"Floreana"
"Drive"
"It’s Only You I See"
"Too Cool For AC"
"Back In The Day"
"Deja Vu"
"When The Love Is Shared"
"Personal Halloween"
"Latitude" (instrumental bonus track, vinyl only)

"We Stand As One" video: