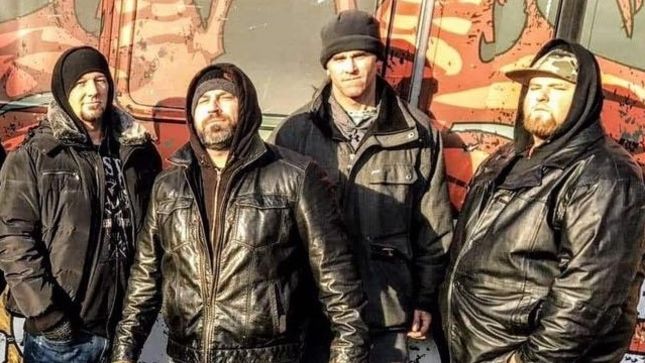 Hard rock band Year Of The Locust- YOTL have released a new lyric video for their single "Sorry" off of the 2019 self-titled Year Of The Locust EP. The band has also announced tour dates with The Zealots that begin on November 9, 2019, in Rochester, NY, at Pineapple Jacks.

New York’s Year Of The Locust are doing things the old fashioned way. Rather than relying on false accolades and manufactured hype, the band has taken their furious live show and stellar songwriting to the masses directly. Extensive touring throughout the country has endeared the band to fans and peers alike. Their new lyric video single, ‘Sorry,’ is a redemption song; "If you listen hard you will hear Brett Hestla's voice in the background. You'll also hear an EBow. Brian Bond's used it to create an eerie background. The song was kind of a wildcard. We knew we had three solid tracks on the EP. So, we took a chance and built ‘Sorry’ right on the spot, with a heavy riff we had experimented with only one time. I just started speaking the lyrics in the studio and it worked. Things got really deep in the studio when I sang the last line of the second verse. It was definitely a memorable moment. It took Brett a few weeks to send us the final version. He felt compelled to add a guitar overlay in the chorus and we were blown away. Not just because we loved what we heard but also that he was inspired enough to put the extra work in on it. The lyrics are right out of my life. It's about personal growth and owning up to your mistakes, and we hope you appreciate the realness." says vocalist Scotty Mac about the new single. It features guest appearances from Ex-Florida Georgia Line guitarist Brian Bonds and vocals by Brett Hestla of Dark New Day fame, who also produced it.

YOTL has toured all 48 continental states and Canada, whilst living in their beloved P-90 bus, "Gertrude." The sound has evolved to fill the void left wide open by a world flooded with heavy-screaming bands or limp rock.