ARTILLERY - The Face Of Fear 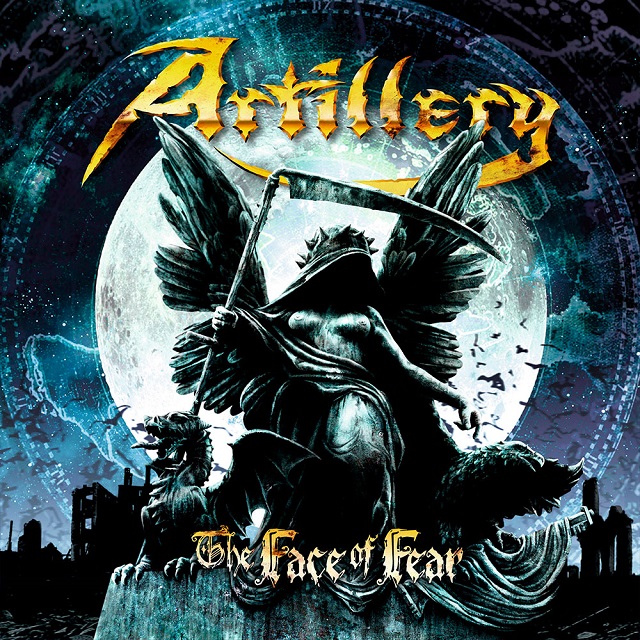 With a metallic crash, the long running Danish thrashers unleash their ninth studio album (and fifth in the last decade). The title track kicks things off, a frenetic number that easily slots next to classic output, like By Inheritance. Helps that the wailing, higher pitched voice has remained constant over the last three releases and as always, longstanding principles remain constant: Stutzer brothers on guitar and professorial looking bass player Peter Thorslund.

Follow-up “Crossroads To Conspiracy” begins with a slower, drum laden groove, then quickly switches over to more typical thrash, albeit with wild guitar runs. Despite the title, airy mallets on cymbals and acoustic tendencies commence the otherwise staccato, mid-tempo “New Rage”. More ear candy, tolling church bells, introduce full speed ahead “Sworn Utopia”. Chugging riffer, “Through The Ages Of Atrocities” gives way to the military cadence snare and swirling guitar “Thirst For The Worst”. Another oxymoronic title, “Pain” has an upbeat (commercial) jangly melody, most atypical, but then there's the eerie 2:07 “Under Water” instrumental. Screaming guitars, pick of the litter is the aggro, hard hitting racer, “Preaching To The Converted”, which would close out the running order, if not for a pair of old re-recorded tunes. Can understand reworking “Mind Of No Return” (which appeared on the '85 Fear Of Tomorrow debut), but sort of mystified why they needed to redo “Doctor Evil”, off Legions, which is only five years old. A couple of these newbies should crack the live set for a while, which given the Artillery longevity, is about the best fans could hope.