AT THE GATES - At War With Reality 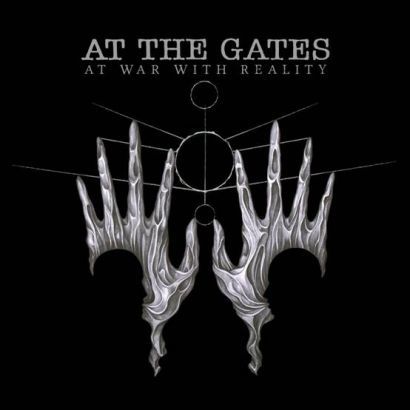 In the almost twenty years that have gone by since Slaughter Of The Soul, the new At The Gates record has been written and recorded countless times by countless artists that have made a career out of recycling "Blinded By Fear". Which is sort of strange given that at the time of its demise in 1996, At The Gates wasn't exactly the monumental success it became in the interim before the reunion in 2007. Like Carcass, and Immortal, and Sanctuary, breaking up may have been At The Gates' most savvy career move.

When the 2007 At The Gates reunion tour rolled through town, two thoughts were prevalent. The first: holy shit, we're going to see At The Gates, this is goddamn unbelievable. And the second: there's almost 2,000 people in this venue and that's almost 2,000 more than were at any At The Gates show during the band's initial run. But it's that surreal point we'll run with a bit further. Though At War With Reality thankfully isn't steeped in the sort of bombastic and hyperbolic lore that surrounded the anticlimax that was Chinese Democracy, listening to At War With Reality for the first time carries the same sense of incredulity. It was a similar story with Carcass' fantastic (on so many levels) Surgical Steel last year around this very same time. But that's where the comparison between Surgical Steel and At War With Reality must end, post-haste. Surgical Steel was, and is, a game-changer and a representation of extreme metal at its 10/10 zenith. At War With

Reality is a good, and sometimes great, album, but it doesn't possess the pandemic urgency and massive immediacy of Surgical Steel. There will be no perfect score here.

What At War With Reality does do so successfully is reflect a sense of not being weighed down by the enormity of expectations. This is a record that is comfortable with what it is and, maybe more importantly, what it isn't. Pardon the cliché, but At War With Reality is the album that would have been written during the late-'90s after the Slaughter Of The Soul tour cycle ended. This is not a record that aims to eliminate the multitude of At The Gates pretenders out there (special hellos go out to Darkest Hour) because one senses that At War With Reality is confident enough to not even be thinking about the hangers-on. This is an effort whose self-awareness extends only as far as the five Gothenburg residents who wrote it: the reality of the metal underground since 1995 doesn't seem to have affected At War With Reality, which truly is a significant achievement.

At War With Reality begins with its storming opener "Death And The Labyrinth" and peaks on "The Book Of Sand (The Abomination)" and "The Circular Ruins", all of which are pure Slaughter Of The Soul. If you're looking for any traces of Gardens Of Grief, The Red In The Sky Is Ours or With Fear I Kiss The Burning Darkness, forget about it completely because that's just not happening here (which, incidentally, is also the case with Surgical Steel not venturing anywhere near pre-Necroticism). And that's fine, because the Yes-as-a-death-metal-band prog of The Red In The Sky and With Fear has not aged particularly well. At War With Reality is confident, cohesive, perfectly produced (the sonics here are a thing of beauty) and, at times, even reminiscent of The Haunted's first two records, if we're being perfectly honest. Listen to "Eater Of Gods" and try to tell us otherwise.

Listening to At War With Reality is made even more interesting by the fact that this album was never supposed to exist. In 2010, At The Gates stated that the band would "stick to the initial promise of not making any more music", but that's a promise extreme metal is glad the group broke. Through At War With Reality, At The Gates has dispelled the misguided idea that it's an act based on just one (admittedly enormous) album and has shown how to deflect expectations with acumen and very impressive grace under pressure.