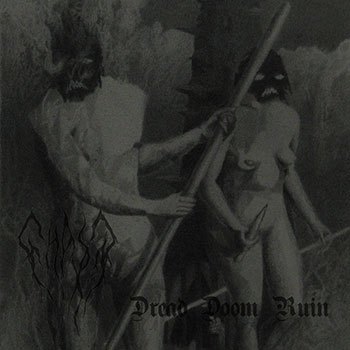 Darkthrone’s Fenriz has been in the game for long enough to know a thing or two about quality control, and when he crowns a group his Band Of The Week on his website, then it behooves us to listen.  Ghast was given Fenriz’s nod of (funeral moon) approval  for its debut album May The Curse Bind, and now this Welsh duo returns with Dread Doom Ruin, an effort produced by the omnipresent Colin Marston (Gorguts, Krallice, Dysrhythmia, Behold The Arctopus). Dread Doom Ruin tips its hat and nods its skull(s) to Fenriz’s legacy no doubt, but also incorporates disorienting leads that are usually found on records by Krallice or Bastard Sapling: the end result is a digging-in-the-dirt dirge, one that mines diamonds despite the coal residue that is everywhere to be found, always. Ghast may not be doing vastly original things, but the band muddies its black metal enough to make the genre feel unacceptable to the masses once again.