HELLOWEEN – Keeper Of The Seven Keys: The Legacy / Gambling With The Devil 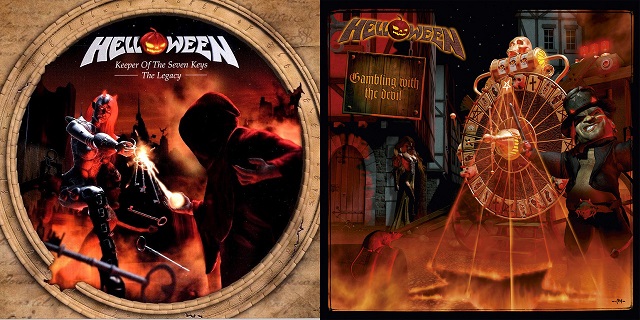 It seems we’ve reached a point in time where albums released in the ‘00s are due for a re-release or reissue and such is the case with these new editions of the Helloween albums Keeper Of The Seven Keys: The Legacy (2005) and Gambling With The Devil (2007). Originally issued by Steamhammer; Nuclear Blast has snatched up the rights of these recordings and are presented on CD and vinyl with terrific bonus tracks to boot. Newer and older pumpkinheads should definitely give these a look!

The Germans were certainly opening themselves up for criticism daring to put out a third part to the hallowed and treasured Keeper albums, but to hell with it; they did and with some success. This record was the first to hold the current lineup – up until reuniting with Kai Hansen and Michael Kiske – with Andi Deris (vocals), Markus Grosskopf (bass), Michael Weikath (guitar), Sascha Gerstner (guitar), and then newcomer Dani Löble (drums). Released as a double album; each CD is 38 minutes long with each opening track over 11 minutes. Yeah, they were obviously going for that epic vibe as put forth from the long tracks on the first two Keeper albums and they work effectively – “The King For A 1000 Years” is thunderous and features many twists and turns with the riff structure and Deris delivers one of his most menacing vocal efforts. It never feels too long and remains a favorite to play over and over again. Considering the high profile reunion that took place with Kiske and Hansen, it’s funny to hear the beginning of “Occasion Avenue” with Deris flipping channels on the radio and scoffing every time a snippet of an older Helloween track plays. Other than that, this song remains a strong one as well, but it could have been cut a couple minutes as it meanders in the middle section too long, but again the riffs slay and is a worthy cut to the prolific pumpkin catalogue.

The Legacy remains a strange one as it ebbs and flows in quality. The Germans had no problem channeling songs that made up the Keeper albums, especially Part II as “Born On Judgment Day” features the character and makeup of “Eagle Fly Free” while “Mrs. God” is like the poor man’s “Dr. Stein”. They aren’t afraid of trying something a tad different though as “The Invisible Man” has a kooky bass opening and some jarring rhythms before erupting into a very memorable chorus and then glides into a piano led middle section with Andi singing about his deeds as the invisible man. Disc one also holds the KISS type riff on “Pleasure Drone” and the power metal majesty of “Silent Rain”, one of their most underrated tracks.

CD2 treks back and forth between power metal stomper and single, singalong material. It’s a bit jarring as of course Helloween, even though they aren’t great at writing ballads (except for a couple exceptions) come with “Light The Universe” featuring Candice Night from Blackmore’s Night and it’s actually a good song, complete with a strong chorus, vocal lines, and Candice fits the mystique of the song perfectly. “Come Alive” and the straightforward “Get It Up” remain some of their most forgettable commercial material, but everything is forgiven with the sturdy and triumphant closer “My Life For One Day”. Tacked on the end are two bonus tracks (which were B-sides on the “Mrs. God” and “Light The Universe”’s singles), “Run (The Name Of Your Enemy)” is an awesome bouncing, galloping track while “Revolution” roars in with a mighty riff as is a shame it was relegated to B-side status. The Legacy is definitley not going to be their legacy, but there’s still value to be found.

Gambling With The Devil along with The Dark Ride remain the best Helloween material since the dawn of the new millennium. For whatever reason; none of these songs have remained in the live setting. There are some timeless gems here and aside from the commercially vibed “As Long As I Fall” and “Can Do It”, the pumpkins keep it straight, heavy, and full of wondrous melodies and leads under a more sinister setting. Deris delivers his best Helloween vocal work. He shines on the menacing opener “Kill It” (led in by the intro “Crack The Riddle”, voiced by Saxon’s Biff Byford), brings clarity to the questioning and tremendously melodic “Heaven Tells No Lies”, and delivers the dread on “The Bells Of The 7 Hells”. He’s the star of the show as the boys paint a canvas of picture perfect power metal. You’re not going to get much than the glorious “Final Fortune”, “Paint A New World” or the pleading “Fallen To Pieces”. And the most perplexing part of all – the bonus tracks are some the best the band has penned! There are four to be found and “Find My Freedom” and “See The Night” are pure power metal majesty and feature some of the best riffs, melodies, and choruses this band has ever done. Gambling With The Devil is a modern power metal classic and while their albums since have been worthy additions to their discography; they haven't turned up aces like this one did.

With these new CD editions, there are no new linear notes from the band or anything; just reprints of the original booklets, but the real juice here is their availability on vinyl. Don’t hesitate to pick these up!