METAL CHURCH - From The Vault 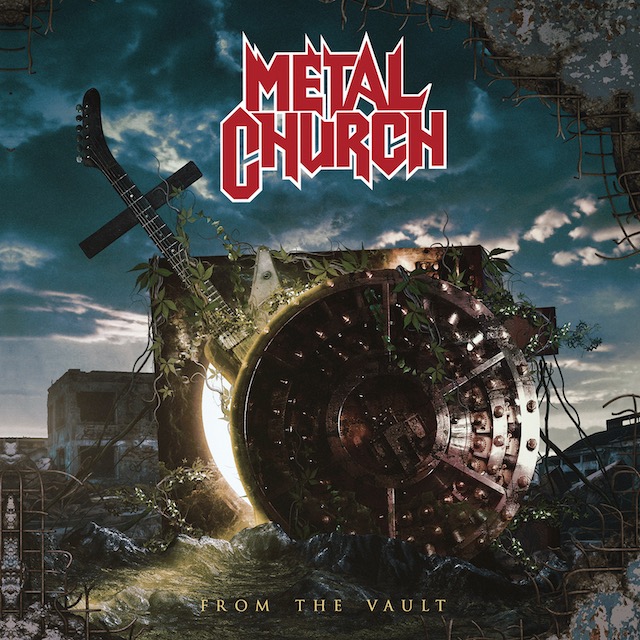 We're all forced to do a little spring cleaning these days and Metal Church were earlier than the rest of us, unearthing several things laying around and adding three completely new tracks, to boot. So what's on offer? The usual leftovers, live tracks, covers, remixes and bonus cuts from various versions.

Let's start with the truly new stuff. The trio is situated so as to kick off the album (along with a re-recorded "Conductor"), "Dead On The Vine" up first. A gritty, aggressive drum driven number, it’s repetitive, easy to sing lyrics should make it a future in-concert favorite. One of the few to really re-capture the sensibilities of their ‘80s material. "For No Reason" is more mid-tempo and musical (as opposed to no-holds-barred rocker), the kind of material the Seattle area quintet have churned out since reuniting with vocalist Mike Howe. Reworked "Conductor" (off the wrongly maligned Hanging In The Balance, the singer's original swansong), ratchets up the aggro quotient. The original was released ('93) as Church (whether they'd admit it or not) were attempting to win a greater number of commercial fans, as "real metal" began to falter, domestically. Here, Howe's delivery is vitriolic, closer to a thrashing screamer than hair metal singer. The guitar tones are heavier, as well, which given the influx of death & black metal during the interim (since its creation) probably holds it in better stead to younger ears. Staccato riffing "Above The Madness" is adequate, but the runt of the new litter, the singer double tracked: one voice in each channel.

Next up are the so-called B-sides from the last record, which quite honestly, was a less than exciting offering. "Mind Thief" is likable, but it's readily apparent why slower "Tell Lie Vision" (a pun on the worthlessness of TV, i.e. tel-e-vision) was relegated to the back burner. Stomping, yet mid-tempo, "False Flag" is a stylistic departure, with tasty snippet of guitar solo, come the mid-section. "Insta Mental", as the name implies is time for Howe to take a timeout, sort of an Edgar Winter "Frankenstein" vibe. The final leftover is another voiceless contribution, albeit entirely acoustic guitar and backing synth, "432hz".

Speaking of the aforementioned classic ‘70s instrumental, the next batch of songs are cover tunes. Coincidentally "Please Don't Judas Me", from Nazareth, continues the acoustic guitar, gradually building in intensity (although never rising above mid-tempo) as the band finally joins in. Funky "Green Eyed Lady” (Sugarloaf) is played pretty straight and "Black Betty" (by Ram Jam) is another staple of Classic Rock radio, plus a great driving tune, by itself. Here's hoping Kurdt Vanderhoof & Co. adopt it for the occasional live show change of pace. Just a pair of live tracks, both aired in Tokyo (last August), for the first time since the early Nineties: "Agent Green" and "Anthem To The Estranged". Deep cuts, both.

Rounding out the platter are a pair of alternate mixes: "Killing Your Time" and "Needles & The Suture", as well as the digital download extras off XI, namely "The Enemy Mind" and "The Coward". The danger with new, "different" versions of known songs (especially 4 years down the line) is that they really add nothing useful. To those of us that bought the (old school?) CD, getting two more from XI is truly a bonus. Of those, lively "The Coward" is the gem. This is more than the usual house cleaning projects, with little duplication of what fans might already possess. Thumbs up!