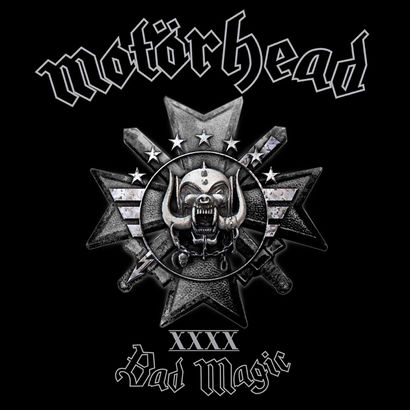 With all the chatter about how Lemmy is fossilizing horribly before our eyes—and he is—it’s a blessing upon the world that he is with us right now in the most significant way possible, and that’s with a whole new Motörhead album (the wonders of science). And as with recent fine kerrangs from the terrible trio, Bad Magic does not disappoint. All the ingredients are there, specifically as evidenced on the last and recent one-third or so of the catalogue, including a sense of urgency, a big ball of energy, much speed, much punk, much of what Lemmy would call “rock ‘n’ roll” (see “Fire Storm Hotel,” “Tell Me Who to Kill,” or “Electricity”), with Kilmister availing himself of sophisticated chemistry, electricity and physics to get the good takes we only need down on tape the one time. Then there’s a smashing pile of gritty production values out of Cameron Webb, who has become the go-to guy for the band’s weird and sleight-of-hand but convincing balancing act between dirty guitar, bass, drums and vocals and enough bass and treble.

Fragile of health, Lemmy is nonetheless his loveable under-rated wordsmith self on songs like the acrobatic double bass rocker “Shoot Out All of Your Lights” or the “Orgasmatron”-like “Choking on Your Screams.” Which brings up a wee complaint, in fact. Like Saxon, like Accept, Motörhead exhibit the habit of checking off boxes of song types album to album... you know, “Now we need one of those.” Yet we get things like “The Devil” and “Evil Eye” which are something quite different. And in the splaying of these, along with simple, very old school things like “Teach Them How to Bleed,” Bad Magic begins to take on an identity and contour as... what? A particularly punky and carnal and retro-graded Motörhead album? Their Machine Gun Etiquette?

Upon reflection, I’d certain say so. I for one have always stuck up for Hammered and Motörizer and The Wörld Is Yours, having no need for too much romanticizing of the past. But I’d say that sentiment is here, deliberate or not, and there are a huge whack of fans that will appreciate that.