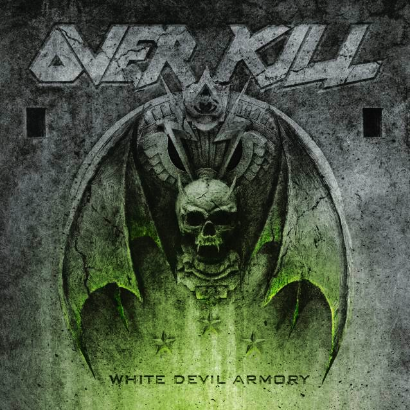 Is there anyone, even the most casual (?), metal fan who doesn't know what OverKill sounds like? Guess there's a couple of ProgPower USA attendees who are in for a surprise this September, judging from the forum postings. Otherwise, with a sense of purpose, the New Jersey thrashers have remained stubbornly consistent (single-minded) for more than three decades. White Devil Armory is no different. Trends have come and gone and like the musical cockroaches they are, the Killers have survived all sorts of musical apocalypses!

Following the short “XDM” instrumental/sound effect intro, it's right into first single/video “Armorist”, Bobby 'Blitz' Ellsworth delivering the chorus: “Armory, I'm a one man army, I'm a warring nation” sounding strangely like “our marine” in his Jersey, by way of Upstate NY tongue. The title actually refers to an expert in heraldry. No doubt Ellsworth and mainstay bassist DD Verni's collective coat of arms features a ubiquitous outstretched single digit. The track features a vicious slice of guitarwork from Dave Linsk and Derek Tailer. The tandem is also afforded a noticeable showcase on the boxing metaphor “Down To The Bone”, complete with trademark Blitz cackle. Calling The Electric Age a two-dimensional thrash record, Blitz contends this latest batch is more 3-D, with nuances. Guess he's talking about the likes of “Bitter Pill”, a slightly off-kilter, more mellow and melodic number amongst the thrashing savagery of 'Where's The Smoke” and a recurrent motif, the cynical look at the loss of liberty, entitled “Pig“'.

The politically charged “King Of The Rat Bastards” (“3 blind mice & a bastard rat vs. Miss Liberty”) uses one of Bobby's favorite expressions, while “Freedom Rings” talks about “She's a hurricane” and utilizes the post-Sandy phrase “Jersey strong”. Speaking of colorful popular local euphemisms, the singer drops a few F-bombs within the lyrics too. The mid-tempo, heavily metered “In The Name” (another battle theme) finale kicks off with military march cadence and remains staccato throughout, with some early Rush inspired trips around the drum kit from Ron Lipnicki. It ends with a cappella gang vocals in an echo chamber, singing the chorus in a sing-song, Monty Python fashion. This Devil's in the details, but (no worries) it's still OverKill.