PETE WAY - A Fast Ride Out Of Here: Confessions Of Rock's Most Dangerous Man 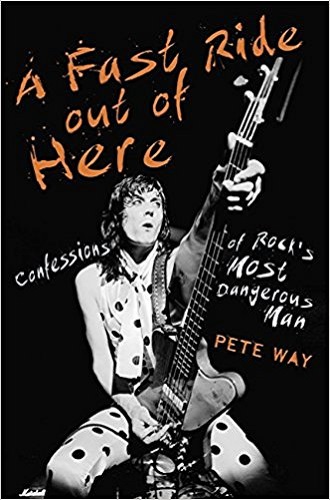 Should have known there'd be problems when in the first paragraph of his prologue Way mistakenly refers to the Oakland Raiders as a baseball team. Later he'd describe a joint being laced with THC, a horse tranquilizer. Might not know anything about drugs (THC being the active ingredient in marijuana), but I know American baseball/football teams, so did anyone proofread this, or just transcribe Way's ramblings, as that's how the book is laid out?

The initial two chapters of the UFO bass player's autobiography show Way immersed in the hard drug culture (pills, heroin, etc.) by age 13. Oddly enough, he wasn't much of a drinker (given his later days, that's something of a complete shock), nor did he like smoking hash/pot. Right to the hard stuff, musically and otherwise. The frequency and variety of drugs available makes suburban London, in the Sixties, sound like Haight Ashbury, a decade later! In addition to his own (often limited) recollections, family life is detailed by inserts from his younger brother, Neill. By Chapter 4, Michael Schenker is in the band (he adds his commentary throughout), admitting Pete never shut up, but since he didn't understand English, it didn't affect him much.

Most (auto) biographies detail the genesis of big tunes, the recording process and concert specifics. While Pete dismisses the construction of “Doctor, Doctor” and “Rock Bottom” in a single sentence, he offers multiple paragraphs on how he discovered cocaine and wrangled to get dealers on tour. Despite being his roommate, on the road and off, singer Phil Moog is silent, never heard from. During all the excesses, Way went through six marriages (two ending with wife dead from OD!) and a pair of children. Iron Maiden founder/bassist (and Pete Way fan) Steve Harris wrote the intro and neighbor/Def Leppard singer Joe Elliott offers accounts of live shows. Not sure if he's trying to be cute, but in print, it comes off as vindictive, going on about Rob Halford's whiny boyfriends, mentioning Neil Carter's homosexuality and even calling Elliot cheap, in so many words.

Around the period of their Obsession album, we get a little more concert related factoids, by then Mogg having developed a severe drinking problem that made him forget words, or according to Way, “sing crossword clues.” By Chapter 10, Way's quit UFO, hangs around English homes with Ozzy (imagine that narcotic smorgasbord), spends a paragraph or so producing the Twisted Sister debut and then forms Fastway, with ex-Motorhead guitarist Eddie Clarke, who contributes his memories. Then there's the short run of Waysted (although he falsely credits Nirvana killing off interest, in error by almost 5 years), rehab and eventually the Walk On Water reunion w/ UFO. The last few chapters predominately concern his junkie lifestyle, then a bout with prostate cancer before “resurrecting” himself (shamelessly admitting to still drinking. once injecting rabbit morphine and still doing the occasional coke, since being free of heroin. Never uses the word “clean”). Tale ends with renewed attitude, as he once again works with GnR producer Mike Clink on a new album (Walking On The Edge). At least it's not an obituary. In terms of music history, disappointing.