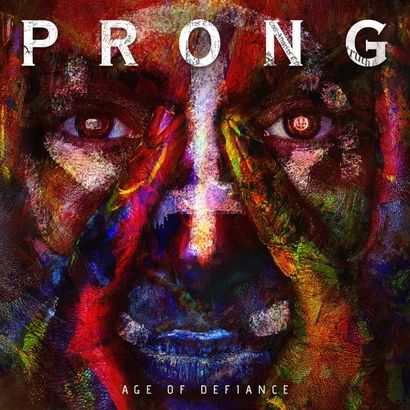 Serving as the stop-gap successor to Prong’s last studio album, Zero Days, which was released in 2017, Age Of Defiance is a five-track EP with a running time of 19 minutes. Comprised of two brand new studio tracks and three live cuts, it features founding vocalist and guitarist Tommy Victor, joined by bassist Jason Christopher and drummer Aaron Rossi. Up first are two previously unheard songs, “Age Of Defiance” and “The End Of Sanity”. Although Victor describes “Age Of Defiance” as “pretty unusual for Prong,” that’s no reason to be alarmed. It’s a natural, melodic progression of the band’s sound, complete with catchy chorus and the question, “Don’t you want to be free of this insanity?” “The End Of Sanity” is closer to old-school Prong, with Victor calling the cut, “a thrash/hardcore/crossover number I wrote especially for our American tour with Agnostic Front.” After more than 30 years in the biz, Victor proves he can still write killer songs.

The three live tracks were recorded at a headlining show in Berlin, Germany in 2015. They are the title track to Rude Awakening (originally issued in 1996), as well as “Another Worldly Device” and “Cut Rate”, both from Cleansing (originally issued in 1994). Strange thing is, they don’t sound live. Reason being, there’s no audience noise or stage banter. Apparently, what you’re hearing is the direct link from band to soundboard, devoid of any applause or cheering. The result is a sterilized, yet incredibly strong delivery of three catalog classics. Could do without the extended feedback that brings “Cut Rate” to a close, but that’s how Prong wrapped it up at Huxleys Neue Welt, so that’s what’s presented now.