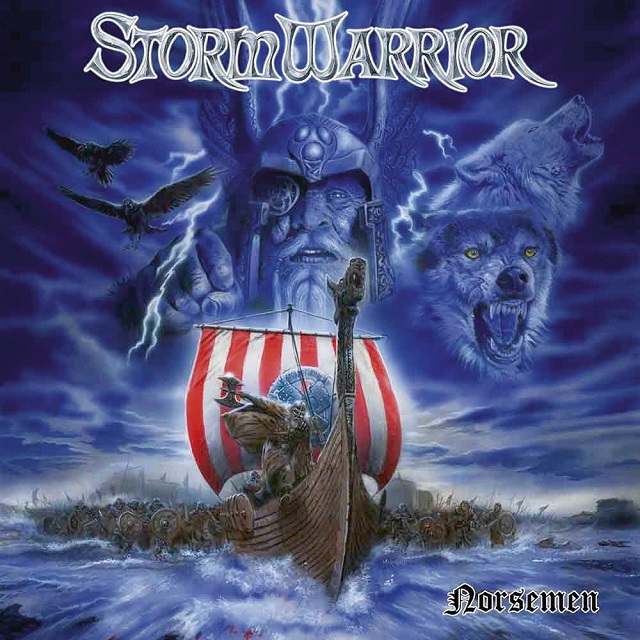 First disc in five years by Deutsche traditional metallers. It welcomes back the rhythm section, each having changed their last name (back to actual Teutonic surnames, rather than Anglicized stage handles?): mainstay bassist Yenz Arnsted (formerly Leonhardt) and drummer Falko Grau (previously Reshöft). As the title implies, these nine cuts pertain to Vikings and Norse mythology. In that regard, it dovetails nicely with '08 release, Heading Northe.

Robust and triumphant, the title track follows an atmospheric, two-minute intro (a similar sailing on the open seas sound effect also closes the album). "Storm Of The North" (no extra E this time around) is practically wall-to-wall blazing guitars. On a similar tact, speedy "Shield Wall" (OK. know there's a recent Amon Amarth track by the same name) is like Primal Fear at their double kick drum fastest/heaviest, verging on thrash. On the other hand, "Freeborn" gallops faster than mid-tempo, a fist thrusting sing-along, complete with the requisite "whoa whoa" chorus. There's rarely a moment to breath, as the Germans tear from tune to tune, swirl of guitars in hand. Repeated glints of steel and accompanying re-en-actors' voices can be heard on the swashbuckling "Sword Dane". Speaking of tales of sword battles, there's also "Blade On Blade", another bouncy, blistering bristler, sure to get the head bobbing. There's an almost Running Wild quality about the riffing "Sword Of Valhalla" finale. One dimensional, full speed ahead and pedal to the metal. What's not to like?