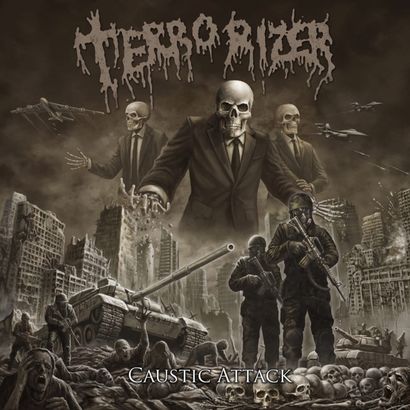 Oh, man, do I like how the first song here, “Turbulence”, starts, Terrorizer immediately sounding more vital, more alive, more grind, than they have since their classic 1989 World Downfall debut. Unfortunately, Terrorizer’s post-World Downfall career has been likeable but spotty, marred by lineup changes and a general inconsistency.

Here, we get drummer Pete Sandoval assembling a whole new lineup since 2012’s Hordes Of Zombies, but it works: you know guitarist Lee Harrison from Monstrosity, and bassist/vocalist Sam Molina also did time in that band, so what we have here is a trio with some serious resume name-dropping power but also serious chops (also, let's not confuse this band with Terrorizer LA, the other Terrorizer band with one dude from World Downfall playing Terrorizer songs, argh).

The Monstrosity guys don’t bring much more death metal to the table than Terrorizer has always had, the band still being 80/20 grind/DM, but here the grind sounding way better than it has since World Downfall. Check out “Devastate” and “Invasion”, the band somehow ending up more crusty and grinding than when they had people from crust/grind bands in their lineup, but then head over to the 4:58 “Infiltration” to see the band using some of that Monstrosity experience to lay down a powerful death/grind epic. “Failed Assassin” also has some DM whiplash groove to it, the album losing a bit of steam around the three-quarters mark (44 minutes is pushing it for this sort of stuff; 35 minutes is ideal for maximum impact) but never quite getting exhausting, Terrorizer finally again dropping an album that’s easy to fully back.