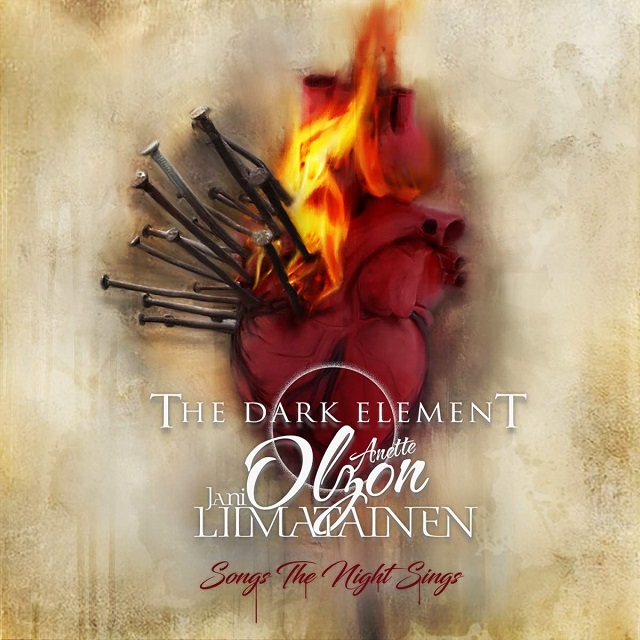 The Dark Element's second outing featuring former Nightwish vocalist Anette Olzon and ex-Sonata Arctica guitarist Jani Liimatainen, Songs The Night Sings, is an interesting listen in that for the criticisms about cashing in on former glory that automatically appear on the tip of the tongue, it does have something significant to offer as a genuine musical venture. On the surface there is a definite Diet Nightwish quality to the proceedings that go well beyond Olzon's vocals. Lines can be drawn to the signature Nightwish sound of Dark Passion Play and Imaginaerum - the albums from Olzon's tenure with the band - albeit stripped down, ensuring that some fans will be roped into that million-selling comfort zone. But, let's be honest, it would have been remarkably stupid for all involved not to use the hook at their disposal. Thankfully, and to their credit, Olzon and Liimatainen succeeded in creating something that can ultimately be judged on its own merits.

Cutting to the chase, "Not Your Monster", "Songs The Night Sings", "Pills On My Pillow" and "Silence Between The Words" are loaded with Nightwish DNA. That said, the songs are well done and altogether enjoyable... although "Silence Between The Words" borrows too much from the Nightwish track "Edema Ruh" from the band's Endless Forms Most Beautiful record. "Pills On My Pillow", in contrast, is the heavy kinda something Tuomas Holopainen hasn't done since "Wish I Had An Angel"; it's nice to hear, and the Olzon / Liimatainen partnership works well.

"The Pallbearer Walks Alone" is trademark Liimatainen from that kid who shredded his way through Sonata Arctica's Ecliptica album some 20 years ago, and the song is a lyrical firebomb; thoughtful and intense. "When It All Comes Down" is a stand-out mid-tempo crusher, big on guitars and drums nuanced by keys and catchy strings, while "Get Out Of My Head" is the resident schizophrenic pop metal track that descends into some truly wonderful electro-weirdness half way through. Easily the adventurous song on the record and an instant favourite. Closing track "I Have To Go" is a simple and admittedly gorgeous lounge piece giving Olzon center stage that is, sadly, not quite three minutes long.

Kudos to Stratovarius drummer Rolf Pilve for bringing the thunder to the album, and hats off whoever is responsible for the presence of mind to shake up the song arrangements ever so slightly to keep people off balance.

I was never completely sold on Olzon fronting Nightwish given what Tarja Turunen accomplished before her entrance, but she shines here in a big way. The Dark Element's identity is not yet fully formed, but the potential for creating something unique (as far one can be in this business) is there.