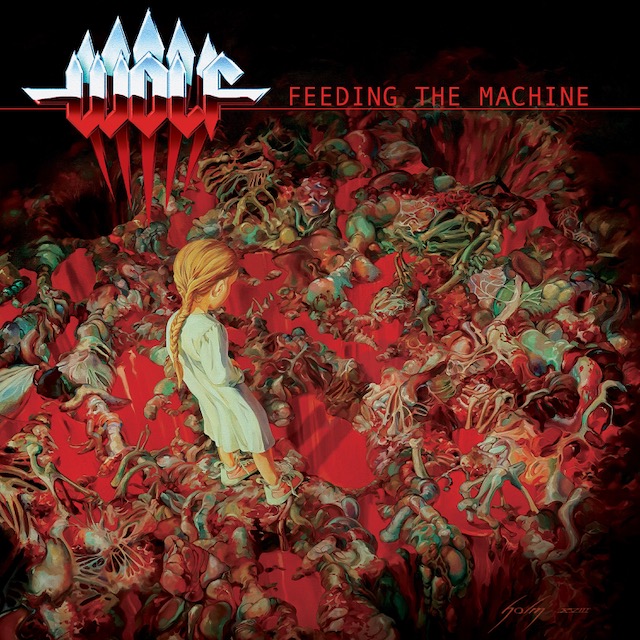 Alongside fellow Swedes Bullet, Wolf were part of the first generation retro-metal acts, a now well populated field. In '03, it was a pleasure to finance their first North America gig (the BW&BK 6-Pack Weekend). Niklas Stålvind (founding guitar/vocals) makes a profound statement, right from the start of "Shoot To Kill": "Let's make it clear, I don't believe in God. And I deny the Holy Ghost. Your blasphemic rituals and crucifix are useless." An upbeat opener, with a nasty streak, that basically says there's no second chance (afterlife) so make the best of the one life you have to live.

"Guillotine" is built around an infectious, recurrent riff, whereas "Dead Man's Hand" is a mid-tempo crawl. Closer to countrymen Candlemass than the speedy, traditional metal for which Wolf are known. Early in his career, Stålvind's clan (now different, thanks to several line-up changes) covered Mercyful Fate ("A Dangerous Meeting", on the sophomore Black Wings effort). Sonically, "Midnight Hour" and "Mass Confusion" both recall a similar timbre, the vocalist often employs a high pitched tweak anyway.

"Devil In The Flesh" picks up the pace once again. The staccato, but catchy, high-end guitar of "Spoon Bender" sarcastically questions the validity of paranormal psychics like Uri Geller: "Mesmerize the public eye and feel the cash flow in your system. I bend reality. I bend your mind to me." Hammering rhythm kicks off "The Raven', which otherwise feels a bit like Ghost. Meandering (almost Middle Eastern) guitar solo during spirited "Black Widow" before "A Thief Inside" rounds out the latest dozen.

Easily my favorite Wolf disc in more than a decade. Highly recommended for old fans, as well as interested newcomers.