Crossfire: FAITH NO MORE's First Album In 18 Years "Sounds More Like The Warm-Up For The Mind-Melter The Band Is Capable Of"

Sol Invictus, Faith No More’s first full-length album since 1997’s Album Of The Year is out today via Reclamation Recordings/Ipecac Recordings. “What I can say is that I think through our experience as musicians over the years, I think what we're doing reflects where we've gone since we made our last record as Faith No More. I think this kicks things up a notch,” explained bassist Bill Gould. “And I think there's parts that are very powerful and there's parts that have a lot of "space”. Everything we do, with our chemistry, the way we play; it's always going to sound like us. It's just what we do, that makes us feel good.”

In the latest bout of BraveWords' Crossfire, Sol Invictus, is dissected by Martin Popoff and Greg Pratt below. 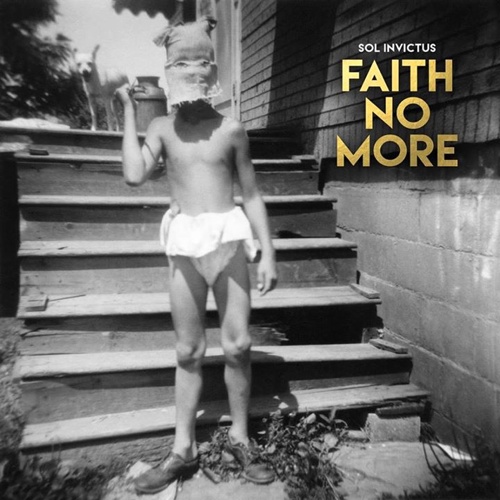 I’m hoping Sol Invictus is one of these records that’s tough to love right away, but you keep finding one more song, one more song, one more song to add to the ones you love and then look, you have six. But my early impressions are, loved Kuyss, liked early Queens, later Queens less so, and by the time of Them Crooked Vultures, it was just murky, precious alternative rock. Lots of variety here, but murky overlays all of it, the brief, dark, thrashy moments, Patton’s mixed-back vocals, all the Lemmy bass, the soft cymbals, bad snare sound, the experimental post-punk goth everywhere. I’m way past first play, but immediately on first play, I had only one song that I just had to have in my life and reminded me why Faith No More is one of my favourite bands ever, and that was “Sunny Side Up,” prolly because of singing and melody and piano, against an insidious prog beat. Now I’m liking two or three more but there’s no big hugs. It’s cool in a way—this is exactly how we all were eventually seduced by Angel Dust. And no question, Sol Invictus positions like that record, i.e. the hip, cool, non-commercial album. But yeah, not only is there no bright, hooky metal here, there’s very little metal at all (not that that’s necessarily a problem) or hooks. There’s also more than a few squared-off military beats—like four tracks’ worth—and yeah, don’t like the sound of any of the drums, don’t like the middling, mewling guitar sounds, which are just sort of noisy, and thus having to compete with the distorted bass and drums, not to mention Mike’s voice when he starts screaming. It’s weird, with the vocals, there’s something conservative about them. I thought maybe we’d get some wild Fantomas and then some of his most plush crooning—extremes—but he’s mostly using all his middle personas, upon songs that don’t really sound like the band wants to communicate, like they want to weed out the less serious fans and keep only those who will work for it. So yeah, “Superhero,” “From the Dead,” “Rise of the Fall”... some of it I’m liking in the spirit of deep album tracks, but the whole thing is deep album tracks only, besides clear hit, “Sunny Side Up.” For me, in my life, this is clogged up and confused like the second and third Lords of the New Church albums, or major label Mission, or Love and Rockets, when, with a few adjustments and substitutions, it could have been delectable and seductive like Phantasmagoria and Anything by The Damned. Put another way, the sounds are so dishwater, and the arrangements so amplifying of that, with brightness added to the sound, and three or four more instantly grabby tracks like “Sunny Side Up”—and maybe a conventional metal tune or two—it would have approximated the band’s own less indulgent gothic world created upon both Album of the Year and this scribe’s favourite, King for a Day, truly an album that worms its way into your veins over months and years. Instead, ponderous and... murky.

Well, talk about having a lot of expectations to live up to: Faith No More haven't put out an album since 1997's Album Of The Year, and as the years have gone on, the pioneering weird-rock band's reputation has only gotten shinier and shinier; I don't come across a lot of people who have much bad to say about Faith No More. Myself included: I love 'em, and think albums like Angel Dust and King For A Day... Fool For A Lifetime are pretty much untouchable. And it's almost like my mere mortal brain cannot handle how to process this, the excitement of the first listen of Sol Invictus being almost unbearable. Will I love it no matter what, like Carcass' comeback disc? Or will it just face the unbearable weight of the band's progressive legacy and not move forward like I need it to (hello, At The Gates)? Depends on my mood: I've definitely felt both during the considerable amount of time and listens I've given this album. As always, the rhythm section is top notch, carrying these songs along with a certain feel that has been sorely missing in my life since the last time FNM released something. The slow-burning title track was a poor choice for an album opener, 2:37 of a song that goes nowhere, but "Superhero" rocks hard and quirky, and is an album highlight nice and early on here. It's followed up by "Sunny Side Up," which is frustratingly catchy, its chorus seemingly existing only as an exercise in matching syllables to notes. Love the verses, but hate that chorus. "Separation Anxiety" and "Cone Of Shame" do the eccentric, crazy-lounge King For A Day FNM thing well, and while neither are mind-blowing, both are easy to like. Later on, "Motherfucker" is one of the best cuts on the album, and although I've heard people complain about it, I think it's actually a great tune, the band at the height of their more hard-hitting power. Ultimately, this album's problem is that there are just too many forgettable songs on it (that bottom third just will not warm up, no matter how many months I've been trying to get it to; fully four of the album's last five cuts just do not stick, although closer "From The Dead" has a ton of FNM spirit), and I can't help but yearn for something that totally shatters my expectations, which is what FNM does best. Sol Invictus (which definitely sounds more like Album Of The Year than any other of the band's output) was definitely, and admirably, written for the band and the band only (these are not songs that care if they impress anyone), but it sounds more like the warm-up for the mind-melter the band is capable of, the one I'm keeping fingers crossed they deliver next time. Final note: this confounding disc gets a high mark despite my inability to really call it my own, as even a relatively dull Faith No More album still has plenty to chew on, integrity to spare, and great drumming for miles.