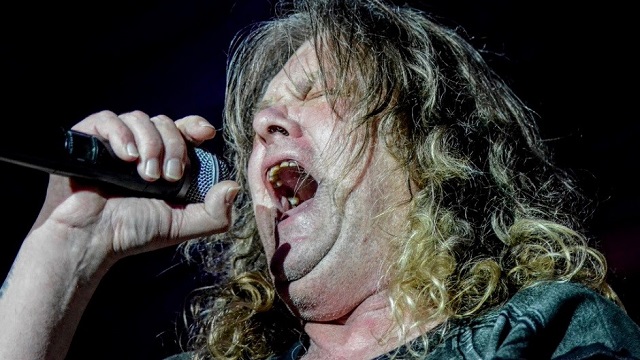 It’s been a tough road of recovery for the past two years since Grim Reaper leader Steve Grimmett suffered a tragic partial amputation of his right leg while on tour in Ecuador in early 2017. But the strength of the human spirit and of course the power of heavy metal sees the singer in tip-top shape as they bring British hell back to the live stage and work steadfastly on the follow-up to 2016’s Walking In The Shadows. BraveWords recently spoke with Grimmett about his daily determination and how he was embraced by a big heavy metal hug from fans across the globe. We also chat about the remarkable fame they acquired in mid-‘80s North America with a string of albums (See You In Hell, Fear No Evil and Rock You To Hell), that made them a household name on these shores. Oh, by the way, he also sheds light on the rumour that he was on the short-list to replace Bruce Dickinson in Iron Maiden!

BraveWords: Talk about getting your mind back into Grim Reaper-mode more than 30 years after Rock You To Hell?

Grimmett: “Determination, really. It never left me. When I was in hospital, I had just half an hour of free internet every day, and I spent all that time - well half that because I needed to speak to my family - so I was doing that for 15 minutes, and then 15 minutes was spent on trying to find out how the hell I get back up on stage. I went through prosthetics and all that sort of stuff, and because we have the NHS in England - National Health - I was trying to find out what I got from them, etc., and it turns out I got everything I needed. It wasn’t an easy road, but six months after losing my leg I was back up on stage.”

BraveWords: The entire heavy metal scene was on your side. It was very tragic, but you wouldn’t want any better community to show their love.

Grimmett: “That was world-wide, everywhere. When I talked to my wife, she said, ‘oh they’re doing this, and some other people are doing this, and they’re raising money, etc.’ And they have a thing in England now which we’re playing at this year called Grimm Up North, because we say ‘it’s grim up north’ in England. It’s part of my name as well, this guy came up with it. He said ‘What do you think?,’ and I said, ‘That’s perfect! Perfect for the festival.’ So we do that every tour, they do it every two years now. The first one was for me and for diabetes in the UK and now when they do it every two years, it’s for a different charity - for fast response stuff like air ambulance, and all sorts of stuff.”

BraveWords: Can you describe your emotions that first time you got back on stage?

Grimmett: “It was something else. It was very tangible. The crowd was going nuts. The stage was split in two, and then I got myself down, with the help of my wife, onto the second spot of the stage and that had a walkout into the middle of the crowd. They went absolutely fucking apeshit. It did bring a tear to my eye, yeah it really did. Because it was all new as well. It was the first show really, so just getting onto the platform, up the steps, all these things, and of course we’re worried, quite rightly, what am I going to do if I fall over, all these things that you didn’t know you could do - but we went on stage with the thought that we’re just going to do it. And the second it started, it didn’t feel any different.”

BraveWords: Wow, you put tears in my eyes.

Grimmett: “Honestly it did. And as I walked out there the crowd got louder and louder and louder. I was yelling ‘Fucking turn my mike up!’ It was awesome. And right there that made it all worthwhile, because it wasn’t an easy thing to get over. And ever since, everywhere we’ve played in the world so far, it’s been like that. They’re all pleased to see me being there. What matters is that people want to go and see the band, the music, and that was always the overriding thing. And it’s nice that it’s balanced itself back out now, and I just kept going and going and going. After a song, people don’t even look, they don’t think about it. But if I fall ass over tit they do - they all gasp in shock, and then they all laugh (he laughs!).”

BraveWords: So are the creative juices flowing in terms of new material?

Grimmett: “Yeah, we’ve got an album written. We’re just finalizing recording, and we’ve got a tentative date sometime late summer. The album is called At The Gates. It’s a continuation of what we did last time when we did Walking In The Shadows, but very expanded. Because it’s not Grim Reaper anymore. We’re still keeping it Grim Reaper, but some of the sounds, some of the songs are different. I know damn well that people are going to love it.” 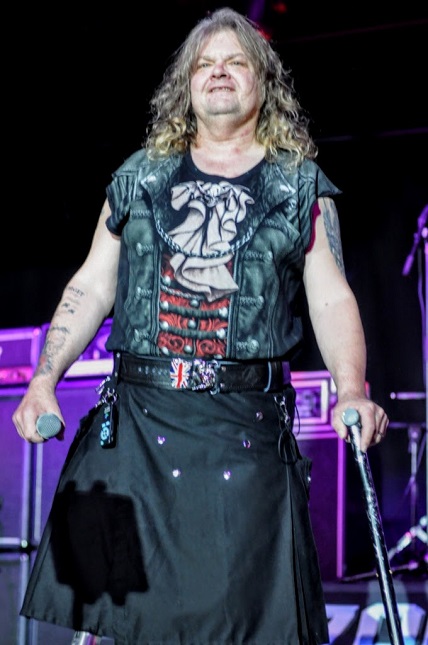 BraveWords: Was there any weirdness with Onslaught on 70000 Tons Of Metal this year, with both bands being part of this year’s line-up? Do you have any relationship with those guys?

Grimmett: “The only guy I don’t really like or get on with is Nigel Rockett. He was an absolute asshole when Steve Grace put the band together for the In Search Of Sanity album, he didn’t like that.”

BraveWords: It is a brilliant record. By far my favourite Onslaught record.

Grimmett: “It’s still the best one. It’s still the one that sold the most albums. And basically, all it was doing was putting money in his fucking pocket.”

BraveWords: And he’s pissed off at you.

Grimmett: “I don’t care about that. They asked me to play with them, but after the shit they gave me after we got the Sanity Days thing going, I said ‘I don’t think so.’ It’s stupid - what I should have said was, ‘yeah, I’ll do it for a couple of grand!’ (laughing). But if Nigel came up to me and touched me on the shoulder, I’d speak to him. But he won’t.”

BraveWords: Did he reach out when you had your injury?

Grimmett: “No. The Sanity Days guys did. But not any others. The reason that we stopped actually was not because I lost my leg, but the guitarist had bladder cancer. Poor bastard, he nearly died as well. He can’t do anything anymore, and we really didn’t want to do Sanity Days without him. It was bad timing as well, because the album had just come out, which I thought was a quite decent album. Very selfish of him.”

BraveWords: How are you dealing with the new era of the music business, and social media?

Grimmett: “I like it, actually. Because we’ve got far more input than we ever had. You can only trust the label to do so much - and they do their fair share - but being able to pinpoint a particular audience, pinpoint people going to a show, I think it’s absolutely awesome. I don’t use it on a daily basis, but at least on a weekly basis, just doing stuff, posting stuff. I encourage fans to get in touch with me. It’s the birthday thing as well. I always do that, every day when it comes up, I send Happy Birthday messages, to everyone. Some of the replies I get are like ‘Fuuuck! Steve Grimmett did that!’ And it is me that does it, nobody else. My son does all the updates for shows and that sort of stuff, but I do all the personal stuff.”

BraveWords: What’s interesting is how big this band was in the States and not in Europe when See You In Hell was released. Isn’t that strange? And RCA wasn’t known as the big rock label either, so the suits must have just been blown away by the response.

Grimmett: “Well, that’s what started it all off. What kicked it off was that. They put it out on MTV and they had a questionnaire after it asking ‘What do you think? Should we show more of this stuff?’ And they just got inundated with responses. So it went from a one-time only show to maximum rotation which is seven times a day, seven days a week, for seven weeks. It was awesome. And that’s why we did well there. But we didn’t do anything anywhere else because I think we were mismanaged. I’m sorry to say that because I still get along with the guys who managed us, but I think they just didn’t know, and it’s a shame.”

BraveWords: Do you still see any royalties from those records?

Grimmett: “Not a penny.”

BraveWords: Wow, why is that?

Grimmett: “Because I think we had royalties, but I never saw any of it. It wasn’t a huge amount, but after the band split up, RCA said they don’t know where to send it. Ten years I’ve been trying to get this.” 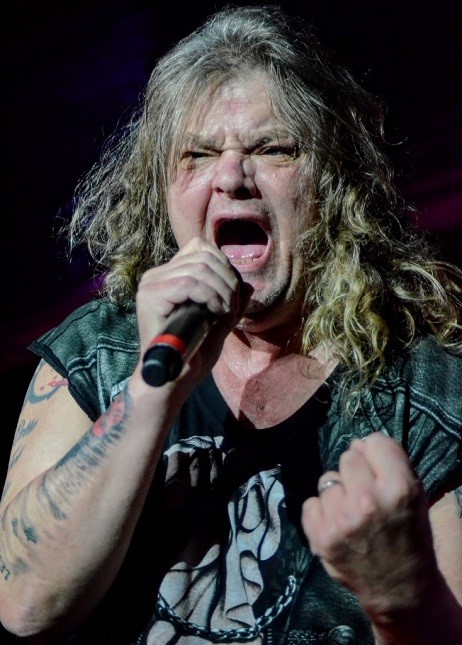 BraveWords: Well, there’s a lot of bands in your situation. You need to hire lawyer, and then it costs more than what you’re owed, so they don’t even bother.

Grimmett: “Well, we’ve got it to a point now where they know that they’ve got to send it to me, but they’re still hanging on. And they’ve been in touch with us to say yes we do owe you the money.”

BraveWords: So you have a lottery win coming up!

Grimmett: “Might be, yeah. But at least it puts a full stop at the end of it - you know, it’s done and dusted.”

BraveWords: There were rumoured to be a dozen or so candidates to replace Bruce Dickinson when he left Iron Maiden in 1993 and apparently you were one of them.

Grimmett: “Yeah, I didn’t get it! I went through (Iron Maiden manager) Rod Smallwood, because I know Rod fairly well, and I said ‘I want part of this’ and he said ‘send me a demo.’ So I sent stuff, and I phoned him up after about a month and he said ‘I think you’re in the top three for Maiden.’ And then I heard that they picked Blaze (Bayley). I mean he’s a great guy, he’s a great singer, but at the time he was only just coming up to being known. I was already touring in Japan, the States, the UK. There was even a petition in Kerrang!, me for Maiden, that was quite funny. Yeah, I would have liked that job.”