When BLIND MELON Toured With GUNS N’ ROSES – “I Would Sit Next To AXL On The Couch; He Would Turn To Me And Go, ‘Who Is That Guy?’” 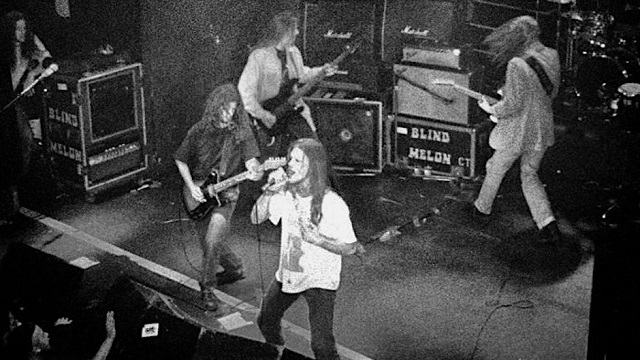 Shortly before Blind Melon scored a major hit with their self-titled debut album, they embarked on a tour opening up for Guns N’ Roses in the spring of 1993—who were still touring in support of their sprawling Use Your Illusion offering.

It turns out that Blind Melon’s late singer, Shannon Hoon, went back a long way with Axl Rose—both hailed from the same town of Lafayette, Indiana. And when Shannon relocated to Los Angeles, Axl lent a hand—resulting in Hoon providing vocals on the G N’ R classic, “Don’t Cry” (and appearing in its incredibly popular video).

In an earlier book of mine, A Devil On One Shoulder And An Angel On The Other: The Story Of Shannon Hoon and Blind Melon, I was able to interview all of the surviving members of Blind Melon’s classic line-up, as well as others who witnessed first-hand the shenanigans that went on during the BM/G n’ R dates—featured in a chapter entitled ‘Crammed in a Van Tour’ (while an earlier chapter explores the two singers’ friendship, entitled ‘Axl and Shannon’).

For your reading pleasure, below is a snippet of the former chapter, and in case you were wondering, A Devil On One Shoulder And An Angel On The Other is indeed available for purchase as a paperback version or a Kindle download here.

Glen Graham [Blind Melon drummer]: “Then we got the Guns N’ Roses thing. We went out with those guys, and that was amazing. That was sort of life changing. You felt a lot better about the whole plan. We got pretty good responses on the Guns N’ Roses [dates].”

Gilby Clarke [Guns N’ Roses guitarist]: “Riki [Rachtman] goes, ‘I can’t believe Shannon’s band is doing so well.’ I’m like, ‘God, that’s right!’ I didn’t even put two and two together—Riki reminded me. He looked much different from the Cathouse days to the Blind Melon days.”

Lyle Eaves [Blind Melon soundman]: “[Shannon] loved to grab people and tackle them. When we opened for Guns N’ Roses, I go into the production office to meet these big time road guys—who at the time, were heroes of mine. Y’know, this is what I want to do—the same thing these guys are doing. I go in the office to meet these guys, and as I’m sticking my hand out to shake the hand of Opie, their production manager, Shannon comes through the door and tackles me—in the production office. Lays me out on the floor. A great first impression. It was always something with him. He definitely acted first and thought later.”

Christopher Thorn [Blind Melon guitarist]: “I hated waiting around for Axl every night—that kind of sucked. I saw what I didn’t want to be—that’s one thing that that tour taught me. People stepping aside because Axl was walking down the hallway. It’s like, ‘What the fuck? He’s just a guy.’ I’ll never forget people playing ping-pong in this big hallway, and then suddenly they stopped playing and moved to the side. I was like, ‘What’s going on? Why would you stop in the middle of the game?’ Everyone’s sort of winking, like, ‘Look who’s coming down the hallway.’ It was like, ‘Oh O.K., it’s Axl. Why are you guys stopping? Are you afraid he’s going to get hit with a ping-pong [ball]?’ It was so pathetic. I thought, ‘I never want to be like that—you’re still human, you’re still a fucking punk.’ We used to have to wait, because he would fly in and out on a helicopter. In the States, we weren’t flying around with them—we were in a van, trying to keep up with them on tour. There were times when we would want to leave to get to the next show, and we would have to wait for Axl to fly in on the helicopter. It was just always this ‘waiting on Axl thing.’ It would drive me crazy. But I’m so grateful that we got to open up for them and play to that many people.”

Rogers Stevens [Blind Melon guitarist]: “Airplane! We toured on the MGM Grand [when Blind Melon played in Mexico with G n’ R]—that was really fun. It was full-on rock star treatment. We went from touring in a van to getting on their plane. And they were in their full-on decadent collapse at the time. So that was sad to watch, because I was a big fan—they still played great. You learned a lot from them—they were one of those bands that could really fill up a stadium. They would play on stage at a stadium, and you’d think, ‘Wow, I don’t know if I have that sorta ‘outside personality’ to do that.’ But they could really pull it off.” 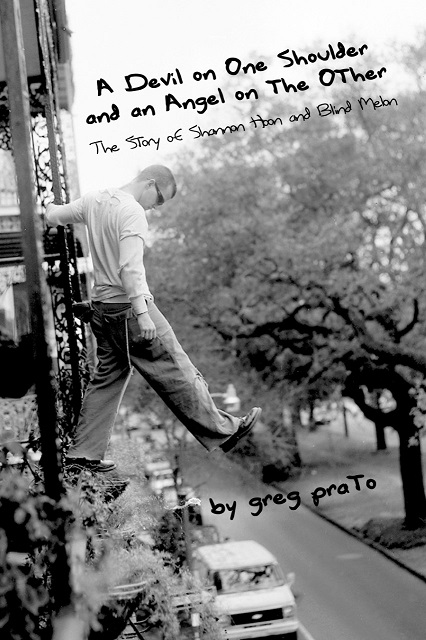 Mike Osterfeld [Blind Melon stage manager]: “The MGM Grand, we would sit on the tarmac and wait for hours for Axl to decide he felt like flying. We would be on the MGM eating chilled shrimp and drinking whatever we wanted—with the doors open, smoking cigarettes. I would sit in the farthest back seat of the plane—while Shannon and Slash would be up front partying their brains out. That was another good story—having to carry him off the plane one time. Slash’s guy— who looked just like Slash—had to carry Slash off the plane when we showed up in Guadalajara. They both popped pills, so they passed out on the flight, and they couldn’t wake them up. So he’s carrying him out, and I’m carrying Shannon out. They’re coming running to the tarmac with wheelchairs for us. Paul Cummings had to spend that night making sure Shannon kept breathing. He had to keep checking on him in his hotel room, because we were real worried he wasn’t going to wake up.”

Gilby Clarke: “Our tour bus was a plane. One of the times, Shannon came with us. He ended up sitting beside me, because we hadn’t spent a lot of time together. Sometimes at shows—especially with G n’ R—we were in and out. I would try to go early to watch Blind Melon or Faith No More—‘cause I hated sitting in my hotel room. I’d rather be at the show, watching the bands, and getting into the groove. On one of the plane rides, [Shannon] sat next to me, and we hung out and talked about what was going on. But man, he was getting so liquored up, so fast. I kept saying to him, ‘Dude, pace yourself!’ Shannon was always ‘in the moment.’ Whether that moment lasted five minutes or twelve hours, he had to get to that moment quickly. That was wild, because we were just hanging, having a couple of cocktails, and I remember him going faster. I always liked Shannon because he didn’t buy into the whole ‘rock star’ thing. It wasn’t just because at that time grunge was fashionable—to not care. He was just cool. He loved being in his band and touring. He was on a plane with Guns N’ Roses—he was having the time of his life.”

Mike Osterfeld: “I’d sit in the back of the plane—away from everyone—and frickin’ Axl would come on with his ten entourage people. His masseuse, food therapist—all these people—and he’d sit in the last seat in the plane! Even though he’s got his V.I.P. room in the front, he’d come sit next to me. I’d immediately get up and try to get the hell out of his way.”

Glen Graham: “We went to Mexico with them—that was kind of odd. Played stadiums and a bullring. One Guns N’ Roses show in Mexico—we used to start our set with ‘I Wonder.’ This is an outdoor show, daytime. Someone tuned Brad’s bass incorrectly and when we started the song, everybody’s looking around trying to figure out the source of the problem and it was a total train wreck. We’re all looking at the guitar tech, and when something like this would happen, Shannon would typically get pissed—something’s not right, it’s your fault, fix it. I remember trying to play the first verse, and maybe the first chorus. Everybody’s freaking out. Nobody knew whose guitar was out of tune. Then finally, we ground to a halt. 60,000 people booed, just consistent. That was pretty good.”

Christopher Thorn: “I have really intense memories of opening up for Guns N’ Roses in Mexico. They didn’t know any better down there—they thought we were giant rock stars in the States, so they treated us like we had sold millions of records. So we’re in Mexico with a bunch of people that don’t speak our language and they’re chasing us around. It was the first time we felt like, ‘Wow, this is cool!’ People showing up at the hotel and asking for autographs—they had no idea who we were. I think just the fact that we were American and opening up for Guns N’ Roses. My one super intense memory of those shows, in ‘Deserted,’ we used to go into this long, extended jam. And I’ve never seen this before—we’re playing in front of like 80,000 people in some giant place in Mexico City. They were turning on and off their lighters to the beat of the song, at the end of the song. And I’ve never seen that since—it was so unbelievable to look out and see 80,000 people doing this. I’ll never forget that moment.”

Rogers Stevens: “The show in Mexico City, we were in a van or limousine going underneath the stadium, to go to the backdoor to get there to play the show. I remember hundreds of people just smashed up against the chain link fences, trying to see—thinking we were Guns N’ Roses. It was like freaking Beatlemania there.”

Gilby Clarke: “We used to do an acoustic set. There was a part of I think ‘I Used to Love Her’—every day we would have somebody different come out and play bongos. Normally it would be crew guys—the lighting director, one of the backline guys. We always had a Domino’s Pizza outfit for this person—a Domino’s Pizza shirt and hat—and what they would come out and deliver us a real pizza. Because our set was so long—it was like a three hour set—we always got hungry halfway through! Every day it was someone different, and every day—I would sit next to Axl on the couch—he would turn to me and go, ‘Who is that guy?’ ‘Axl, that’s Phil—that’s been our lighting guy for the last five years.’ And then one day, Shannon came out—naked!”

Nel Hoon [Shannon Hoon’s mother]: “I never went over a week without talking to him. When he was in Europe with Guns N’ Roses, he made so many calls home that I think Axl got mad at him—because this was on Axl’s bill.”