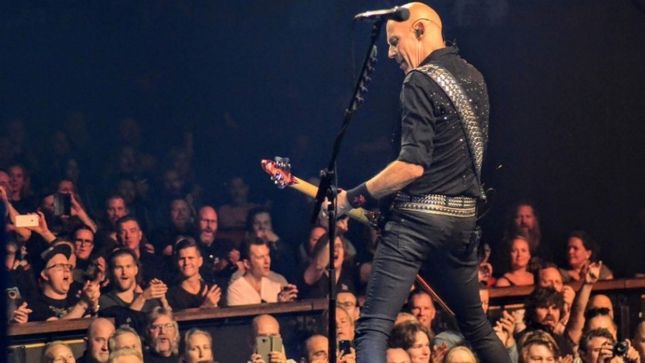 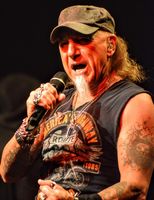 Those in the Toronto hometown of BraveWords have an affinity for their Opera House concert venue. Yet here, in Norway, we're not talking about a club, whose best days are in arrears, but rather a new (2007) steel & glass masterpiece that cost 3/4 of a billion US dollars. Therefore, it rarely plays host to rock, let alone metal, acts. While not as iconic as the one in Sydney, the Oslo Opera House, with its ski slope slanted roof (an observation point, where people relax/sun themselves) is an imposing structure, near the water. Such was the setting of Accept's return to the Norwegian capital, playing alongside Kork, the national orchestra (in skeleton make-up, for the evening). It was also the kick-off show for the Tons Of Rock festival.

Like other events in the hall, this was a seated performance, and although rowdy at times, the crowd remained such (unless headed for the bathroom, or to fetch another drink, although beverages, inside the luxurious theater, were forbidden), until the standing ovation at the end. The curtain rises and there's the band, plus solo violinist in the foreground and approximately 20 piece orchestra (in previously mentioned facepaint + conductor in hooded robe). Early on, it's easy to see why Philip Shouse (ex-Gene Simmons Band) is on guitar, animated and playing off mainstay Wolf Hoffman, as he would be, throughout the night. Mussorgsky's "Night On Bald Mountain" is the first of three quick-hitting classical pieces offered. Mark Tornillo absent from the stage until "Princess Of The Dawn", when a keyboardist also appears. Find myself scurrying through dark/often unlit wooden hallways, up and down various tiers of the opera house, in search of the accompanying photos. 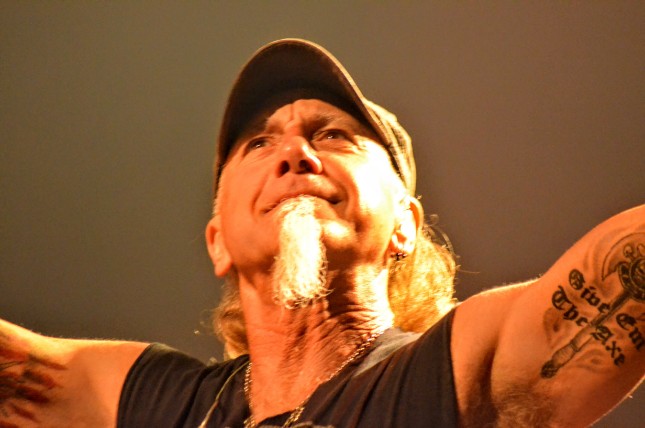 During "Stalingrad", Tornillo unfurls an Accept flag, waving the banner proudly, center stage. It is matched by one in the front row. Afterwards, Mark introduces the band and guest players, nearly omitting the female soloist, saying, "It's been a week, I forgot your name," before correcting the error. The additional symphonic touches really stood out on "Dark Side of My Heart". Tornillo and the trio of stringed rock instrumentalists charged to the front of the stage, in unison, as "Breaker" began. A bit of "Swan Lake" sees Hoffman and the violinist center stage. Away from his usual location, Shouse sways in time to the music, while in front of Christopher Williams' drum riser. The guitars get together, for a joint headbang, stage left (Wolf's side), once the music gets aggressive. 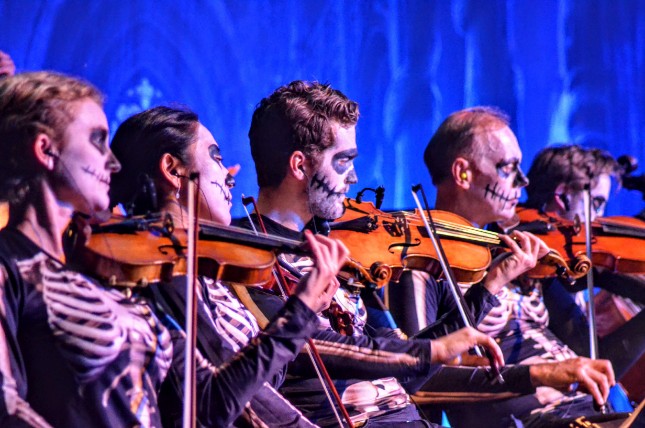 Green lit "Shadow Soldiers" has Tornillo salute and march across the stage, as the rock trio stand abreast of one another. When Hoffman takes the solo, stage right, the singer holds down the fort, gently waving his hand overhead. Some in the audience mimic his lead. Time for another blast of the orchestral. Violin and Williams' cannonading bass drums introducing purple hued "The Moldau", Hoffman and the woman with the bow center stage. It ends in whammy bar crescendo. The guitar tandem starts "Arabian Dance", the three boys with strings challenging the violinist to match them, note for note. When he returns to the stage, for proper set closer, "Metal Heart", Tornillo is wearing a cut-off Harley tee. Strobes of lighting accompany the "whoa whoa" portion, as the crowd picks up the chant. A percussive explosion, a mini-drum solo, if you will, sees Williams bathed in strobes, to finish the song. Then the stage goes black. 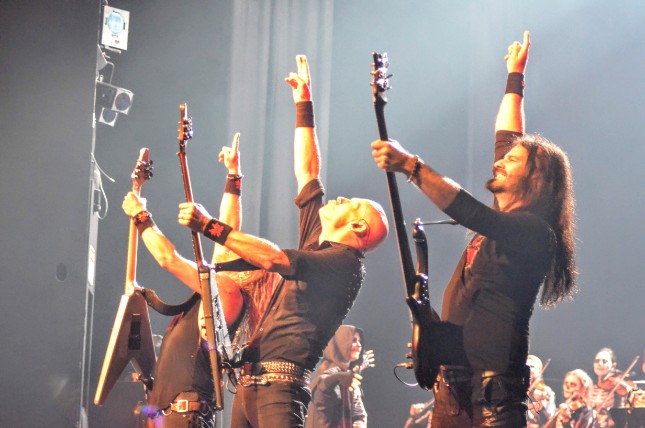 Returning for an encore (although no one yelled that word, nor "Bravo!" Given the environs it would have been both appropriate and somewhat humorous), the violinist is alone, dimly highlighted and playing from sheet music (on a stand) for the only time tonight. Streams of purple illumination streak down from above, as the band enters to "Shades Of Death". Hoffman slyly (and wisely) inserts a snippet of Norwegian composer Edvard Grieg's "Hall Of The Mountain King" into his solo spot and the tune audibly registers with the crowd (who voice their approval). The aforementioned trio stand in line, behind the singer, to start the bass thumping "Teutonic Terror". Come the ubiquitous closing "Balls To The Wall", Tornillo has ditched the sunglasses. Once more, the fans offer the "whoa whoa" sing-along, as the two guitars and bass engage in revising the classic sway-in-time, synchronized stage moves, each ending with their headstock pointed skyward. Take a bow! A short fireworks display (despite the early hour, in the land of the midnight sun) took place outside, launched from the roof of the Opera House, as the guests departed.

Having watched the Wacken stream live and then the DVD, as well as listening to the music, had no idea I'd enjoy the in-person renditions so thoroughly. It is, after all, Accept music, which never fails to get the metal heart pumping. Highly entertaining!