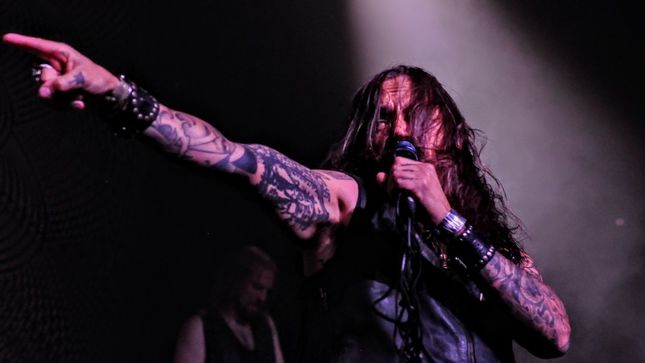 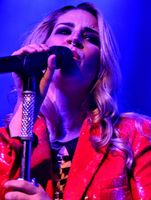 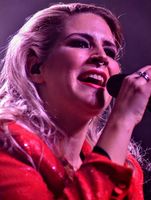 Night of the dynamic, multi-talented redheads, although Delain frontwoman Charlotte Wessels has since become a dyed blonde. While she's collaborated with Devin Townsend, Anathema and countrymen Ayreon (on his solo efforts, plus The Gentle Storm), as well as undertaking her own endeavor VUUR, Anneke van Giersbergen is still best known as the former singer of The Gathering. She strolled onstage, alone, with an acoustic guitar. For close to 40 minutes, under a solitary spotlight, she entertained the crowd with a selection of cover tunes and the odd career highlight, keeping the mood light and self-deprecating. Between the audience participation (solicited or not) and her trilling vocals, at times the unplugged instrument was barely audible. After the opening rendition of U2's "Drowning Man", Anneke unveiled "Valley Of The Queens", from her work with the tall, eclectic countryman: Ayreon, even mentioning the recent showcases overseas. “Since this is a rock show, thought I'd learn a rock song," she demurred, like she'd never been involved in the scene before. Cue rare KISS cut "Sure Know Something". Strumming along, after the second verse, she asked (mid-flow), "How am I doing?" Although the crowd roared their approval, once completed, she assessed her efforts, saying, "Well, that fucking sucked." Just one Gathering tune and while she stayed away from their biggest hots, "Saturnine" is still popular, including the opening line: "The day you left, you had to screw me over." Come "Ih-Ah!” from Townsend, she campaigned, "We love Devy. Call him and say, 'Bring Anneke (on tour)'." The remainder was an odd assortment that included Audioslave, Pink Floyd’s “Wish You Were Here” and the appropriate for her voice “Cloudbusting”, by Kate Bush. While she struggled, musically, with the closing homage to Iron Maiden ("Wasted Years"), the crowd clapped along and added their collective voice, as she yodeled, in a Glinda The Good Witch (from Wizard Of Oz) intonation. The set was such that I can foresee her adding and subtracting songs, throughout the tour, whenever the spirit moves her. 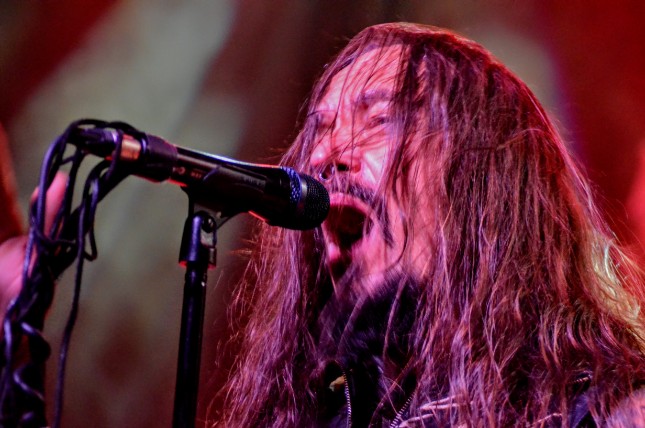 Original Mystery Science Theater 3000 fans are familiar with the name "Sampo", although here in a different context, as Tomi Joutsen violently rocked back n forth off the stage front wedge monitors. "Golden Elk" is green lit to begin. A growling "Four Wise Ones" offers a prominent synth section, as headband wearing bassist Olli-Pekka Laine (who was in Atlanta, for ProgPower, two weeks ago) strolled around the stage. Stage left is Esa Holopainen, looking like young, bearded Michael Schenker (does this guy ever age?), while side opposite was longtime, short haired guitar partner Tomi Koivusaari. Speaking of hair, Joutsen's is draped down his face, Cousin Itt style, from the Addams family. Periodically, he'd flip the sweaty mane behind him, as he unleashes his beastly bellow. Typically later in the set, overseas, the purple lit "Smoke" gets a big response. It showcases the singer's clean and gruff voices, as well as some sweet guitar, courtesy of Holopainen. During its course, Laine and Koivusaari make a foray, stage left. Going back to Tales From The Thousand Lakes, "Into Hiding" is slower, more powerful. To start, it's brutal, but a folky undercurrent keeps it palatable to all but the most narrow-minded sensibilities. Koivusaari adds backing vocals (at the start of their career, as a pure death metal outfit, he was the singer). As ‘70s synth sounds blaze away, Joutsen shouts, "Olli-Pekka, bass guitar!" Jangly, but gruff throated "My Kantele" continues the hit parade, form the golden age of Amorphis. A real ‘70s vibe jam, this time the singer gives a shout out to the keyboard player. A wash of keys introduces the smooth delivered, green lit "Wrong Direction", which ushers in a spontaneous clap-along. Afterwards, Joutsen scurries around the stage, visiting drummer and keyboard risers, as well as each musician. Making changes on the fly, they scratch "Daughter Of Hate" from the pre-printed running order, opting to proceed directly into "Black Winter Day" (perhaps the best known track in their arsenal, certainly amongst old school fans). The lilting, almost flute-like emanations are accompanied by pulsating blue/purple lights. For "Amongst Stars", they call out Anneke, to duet with Joutsen. Caged up all night and without an ability to rock, Van Giersbergen (in a little more rocking attire, a shiny, gold top) is quite active, for one song, bouncing about the stage and punching air. Upon reaching the chorus of green lit, "House Of Sleep" finale, Joutsen stops singing and demands, "Your turn", to which Philly responds appropriately. Good mix of old and new (a ton of merch/styles, to boot). Check out Amorphis when they get nearby.

Delain are now going with just a single guitar, this go round. Sorry boys, spunky Merel Bechtold (for my money, THE focal point) is no longer part of the band, having quit, last June. Amorphis skin beater Jan Rechberger pulls double duty, volunteering to cover for Joey Marin de Boer, still in the Netherlands, delayed by US visa issues. A trio of white illuminated mic stands, band logo emblazoned on the base, lines the stage. Wessels uses hers as a prop and crouch, to lean against as she maniacally thrashes about, shaking her hair, side-to-side. She wears a red vinyl jacket atop a multiple slit halter top. While the tour is billed as a co-headlining gig, there's notably less patrons, once Delain goes on. Gutsy move, a brand new song, "Burning Bridges" kicks things off! Puffs of smoke erupt from the shadowboxes on which they can stand. Charlotte is frequently at the stage edge, teasingly stretching towards the fans, feet away. Throughout the night she employs double fists, imploring the crowd to follow suit, sing along, etc. "Suckerpunch" is met with a big ovation, followed by "April Rain" and the Celtic flavored "Stardust". While bouncy, green hued "The Gathering" would ultimately close the show, surprised to hear "Pristine", also off the '06 debut, bassist Otto Schimmelpenninck van der Oije (try printing that name on a credit card!) offering the gruff voiced lyrics. Towards the end, also aired "We Are The Others", a fan favorite, at least in part due to the guest appearance laden video for the track.

The lengthy tour, including Canadian dates, lasts a month (until October 21st).