CLOVEN HOOF - Live & On The Record 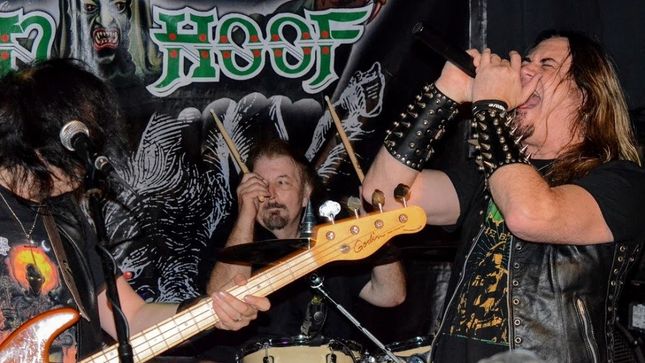 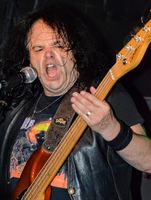 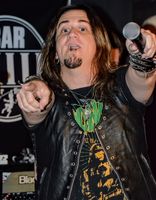 It only took three decades for Lee Payne (bassist and lone surviving member) to get an incarnation of NWOBHM pioneers Cloven Hoof to North American shores. Having such a good time, he re-upped (right away) and eight months later, the band returned, for an extensive, 31 day-month long headlining tour, venturing into Canada, but only a couple of dates west of the Mississippi. Same as last time out, alongside Payne is half of Texas metallers Aska: singer George Call and drummer Danny White. However, the lone guitarist onstage is hotly tipped youngster Iash Baker. Before the show, had a chance to discuss the forthcoming album (now going under the title Age Of Steel, according to Call) with all the particulars. White confirms he did not play on the album, Payne using a UK session musician instead. "George really outdid himself," says the skinsman of his longtime band mate (in several bands). "I've heard it and my response was, "Wow!'" As a frontman, Call is given to hyperbole, but he tries to dial it back and he enthused about the new material. "It's better than Morning Star. There are no (songs to) skip!" Asked for an early favorite, he stammers, then unleashes a flurry, " Touch The Rainbow', "Alderley Edge", which is about Merlin and King Arthur, "Bathory" about Countess Bathory..." Payne also mentions "Touch The Rainbow", as well as "Gods Of War", before continuing, still referencing vinyl, "Side two has a mini-concept revolving around the Dominator (the 2nd album, back in '88). We're bringing him back for a few songs."

"There's no retirement plan," Call says of life-on-the-road (a new Banshee record is in the can and awaits release). "Playing a shitty Wednesday night, you still get food, a hotel (half the time) and instead of a twelve hour drive between Points A & B, it's only four (with a stop off in between)." Tonight, a fan agrees to take the guys out for dinner, another tour perk. When they take to the stage, there are a pair of mummies, with goat skull heads, either side of the stage. Stage right, Payne's domain, there's a Union Jack, while stage left (for newcomer Baker) is not only decorated with the Stars & Stripes, but the youngster has a replica bandanna dangling from his back pocket. Are those red crucifixes, on a white field, emblazoned on each of White's kick drums or is it the English flag (Cross of St. George)? A couple of electrical fans, at the foot of the stage, kept the hair flowing throughout the set.

Kicking off with “Inquisitor”, two things are immediately evident: one the bass tone (courtesy of Lee's old school four string, with giant tuning knobs. When was the last time you saw one of those?) and his activity, rocking out like this might be his last gig. Call works the crowd like the veteran he is, interjecting humor, as well as getting the fans involved. For their mid-tempo signature tune, come the mid-section, Payne goes nuts, flailing around like a straight-jacketed lunatic in a rubber room, although tonight he's only saddled with a bass, in a Delaware craft beer/rock emporium. Occasionally, he adds his voice to the mix. “Highlander” sees Payne jumping around, holding his four-stringer vertically. “Crack The Whip”, off the 35 year old, eponymous full-length debut, possesses an AC/DC quality, as opposed to the punky delivery of “Nova Battlestar”, which allows Baker a moment to shine. Call declares the speedy “Time To Burn” as “a song for those at the STD clinic.” Compared to other classics, “Gates Of Gehenna” (the oldest tune aired, dating back to the '82 EP) is much more aggressive.

George fucks around with Baker, as they start the high-pitched vocal “Astral Rider”. The chugging riffs have Lee and Iash side-by-side, stage right, swaying back n forth, in synchronized movement. The proper set concludes with simple, repetitive “Lay Down The Law”, the titular chorus comprising much of the lyrics. Call leaves the stage and puts the mic in fans' faces, to sing along. Danny starts “Reach For the Sky”, practically everyone in the house joining in the chorus. Plugging an impromptu, after-gig, merch table meet & greet (to commence once they're off the stage), Call jokes, “Get your underwear signed by Lee Payne,” prior to the “Kiss Of Evil” finale. Might be unfashionably old school, but high energy rock n roll fun. Investigate, if they come near your town.

On tours like this, the headliner sometimes finds itself outnumbered by fans of a strong local act, but a powerful band gets people in the door early. Case in point, tonight's opener, fellow Pure Steel act Power Theory. Hats off to bassist Alan D'Angelo, back in action after brain surgery, to remove a tumor. Beforehand, he joked about digging into his skull and how he might not headbang. Once onstage, he soon forgot his situation, as the Philly area band offered a glimpse of the Force Of Will album, with a still unreleased newbie, the twin leads "Path Of Glory", as well as "Beyond Tomorrow" (D'Angelo shaking his head, side-to-side) and "Driven By Force". At one point in the Cloven Hoof set, Call relinquished the mic to the Theory's vocalist, Jim Rutherford. Watch for the new music.