FLOTSAM AND JETSAM - No Place For Disgrace Philly! 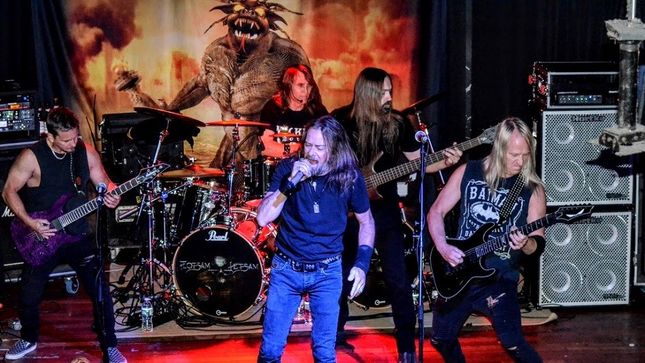 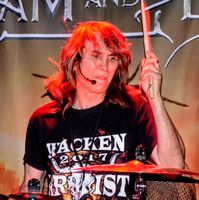 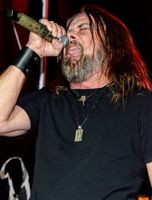 34 dates, in a little over a month, with Fifth Angel/ex-Chastain/ex-Alice Cooper drummer Ken Mary in tow, flipping and twirling his sticks, despite the high speed delivery. Flots stopped by the Voltage Lounge, a mid-week show on the elevated, but postage stamp sized, brick stage. Strange assortment of metal fans in the house, Amon Amarth, Overkill and Slayer tees amongst the three dozen or so curiosity seekers: mostly bald, burly and black shirted. "Desecrator" sees guitarists Michael Gilbert (braided beard) and Steve Conley (blond) together, stage left. Had briefly spoken to him before the show, but onstage Eric AK admitted his voice was roached. Didn't stop him though, almost exclusively alternating between classic, old school ‘80s tracks and newer material. Following "Seventh Seal", he noticed his son, in the t-shirt booth, up in the balcony. Eric stated matter-of-factly, "Go visit my son. Buy a shirt. We eat from what we make off merch."

Green lit "Hammerhead" is greeted like an old friend by the sparse attendees. Despite voicing his misgivings about his throat, Eric still attempted the punctuating high note, bailing just slightly. Gilbert sweeps his purple guitar, right into the titular chorus. The singer introduced "Demolition Man" as "A song about tearing shit up," where Conley takes a prominent role behind the mic. Under green tint, Mary is very animated, repeatedly launching the right drum stick into the air, as the left is spun between his fingers. The pulsating light display for "Smoked Out" is practically psychedelic. The tune is more laidback than the usual thrash repertoire, Gilbert venturing stage left for his dazzling guitar runs.

"Monkey Wrench" sounds like an audible electronic digital download (all whirls and buzzes), the bassist once again offers backing vocals. Eric is situated between the two guitars, headbanging as they go. "Back in '84, for the first time, from our first record and at every show since, for 35 years," the galloping bass introduced "I Live You Die" begins. Once reacquainted, fans join in, typically shouting the second line/title phrase. Blazing "Dreams Of Death" follows, then double backing vocal "She Took An Axe", solo by Gilbert. Afterwards, Eric took a break, announcing "It's always Jack Daniels time!" He asks Michael what he wants to play next. Green lights and horns aloft, for maybe the lone time tonight, Gilbert is at the front and center, for the "No Place For Disgrace" finale, unleashing a torrent of sweeps. Apart from the debut's title track, pretty much played everything people wanted to hear.