IRON MAIDEN - The Legacy Of The Beast Comes To Montreal! 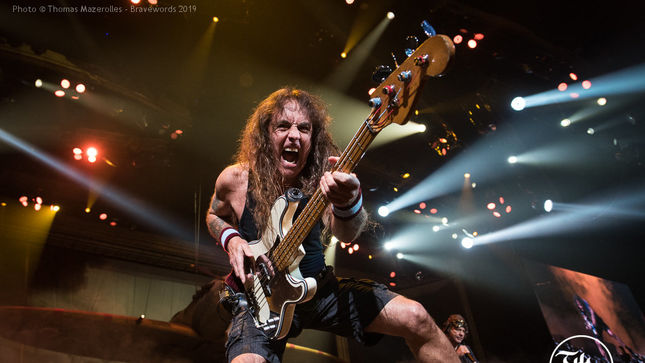 It is with a brand new production, as part of the Legacy Of The Beast tour, that Iron Maiden came to Montreal on August 5th. They advertised the biggest show they ever made and they did not disappoint.

And they started the show the best way one could imagine a Maiden show: with a giant Spitfire flying over the stage on “Aces High”! And it kept on getting bigger and better. The stage went from a camouflage battlefield to a giant cathedral with all the fluidity and ingenuity that Iron Maiden is known for. The crowd went crazy with the giant Eddie’s head at the end of the show for “Iron Maiden”.

“Tonight we don’t have any new songs” apologized Bruce to the crowd in a very good French! Everybody knew the show was going to be the ultimate anyway! The show went on with all the classics from “2 Minutes To Midnight” to “The Number Of The Beast”. The surprising part was two songs of Blaze Bayley’s era: “Sign Of The Cross” and “The Clansman.” However, after the surreal choice was clearly a good move bringing more “rare” songs and fitting perfectly with the production and the rest of the show.

A bit more than two hours later, everybody left the Bell Center with a huge smile on their face. It is fascinating to see how Iron Maiden are still gathering fans from every age and keeping the flame and the energy intact after all the band went through. Up the Irons!