SILVER TALON - Get The Firehouse: Live In Philly! 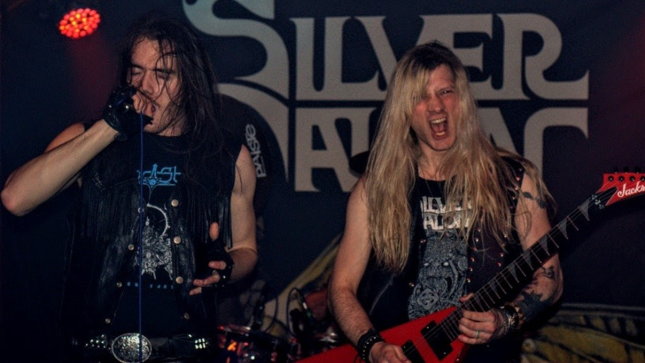 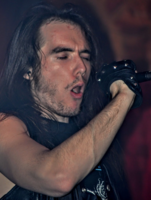 Most club gigs don't end with an axe wielding fireman walking through a smoky room, while a pumper truck sits outside, sirens blaring. Thankfully, it was more comical than dangerous, but more on that later. In the best "life hands you lemons, make lemonade" scenario, the guys in Silver Talon used the demise of former Prosthetic recording artists Spellcaster to propel this Portland, Oregon based traditional metal outfit to greater heights. Aligned with a new (stronger) vocalist, then trading smooth commercial sensibilities for increased intensity and speedy guitars, they issued a debut EP (Becoming A Demon) which has since been picked up by M-Theory Audio, the upstart label by former head honcho of Century Media/Nuclear Blast operations, in the States. The DIY spirit was impetus for the unknown (and at the time, still unsigned) band to book a transcontinental string of club dates. Guitarist Bryce Van Hoosen claims they networked, via social media, with the old Spellcaster fan base. Even touring partner (Croatian NWOBHM devotees) Speedclaw being denied entry into the country couldn't derail the plan. A Philly institution that's housed many a fledgling band, Kung Fu Necktie, the tiny hole-in-the-wall club with infamous $2 Shelf Of Shame beer selection, was the midway point in the journey, before the west coasters started working their way back home. Monday nights are thankless slots on the road, especially just two nights before the biggest bar night of the year (Thanksgiving eve), yet Silver Talon gave a first rate performance.

Local opener bailed, so it was just Silver Talon and a few dozen fans, who had the opportunity to have beer and a conversation with the guys, before and after the show. Onstage, a short intro saw all the guys circled around drummer Colin Vranizan, backs to the crowd. Good to see they brought their own light show (for a dimly lit room) and a pair of smoke machines, whose synchronized puff soon laid down a thick blanket of fog throughout the club (but that wasn't what summoned the fire brigade). The cover of Sanctuary's stratosphere scraping "Battle Angels" was up second, but singer Wyatt Howell wisely opts not to mimic the seemingly helium induced vocals on the original version. Van Hoosen was to his left, afforded a good portion of the stage, where he stood, legs splayed and hair flailing as fingers fly up and down the fretboard. The blond six-stringer reminded me of Jay Jay Reynolds, of Malice/Metal Church fame.

"Warrior's End" is an all-stage, headbanging fury. Pre-recorded snippet of "Breath Of Kerosene", the instrumental that opens the new disc, was piped in, prior to the rollicking speedster "Devil Machine". Same sequence as the studio running sequence. Silver Talon only tapped the brakes (temporarily) for the slower, heavier "Cold Embrace", where Van Hoosen's hammer-ons lead into twin leads, with guitar partner Sebastian Silva, shoehorned stage right, against the wall. Speaking of twin leads, the tandem open their signature tune, which was supposed to be the finale. However, upon completion, Howell announced they'd play another, non-album cut, "Power Rising". No sooner had the guitars kicked in then the power went dead (mixing console and stage volume, simultaneously). Blow your speakers, Manowar! Both band and the club were at a loss to explain the situation. Unable to quickly identify and rectify the situation, eventually the guys simply walked offstage, into the newly converted crowd. Everyone was joking about a tripped circuit breaker, or the irony of the song title, when the first fireman appeared onsite. It's a small club, so there was no problem seeing to the street, although obscured by a second approaching "rescuer", the rotating red lights, on the truck outside, breaking the night sky. Hot, sweaty (and artificially manufactured smoke) incendiary set, but (luckily) just a false alarm, with regards to the fire. Regardless, Silver Talon (and those that were there) will have a great story to tell. Just the first of many, I hope.