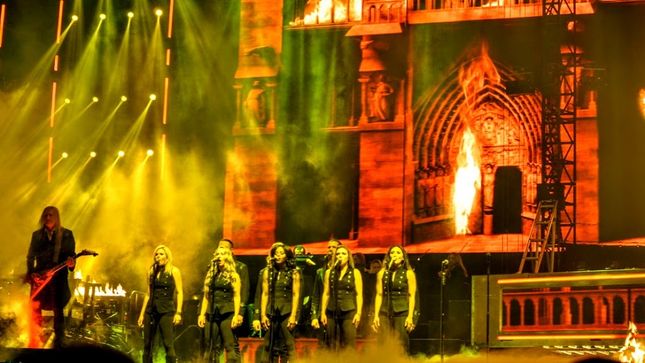 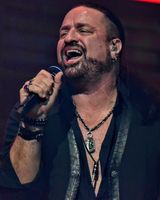 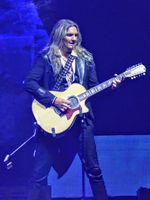 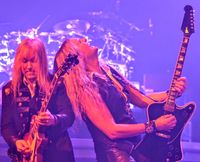 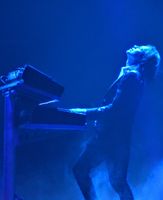 Believe it or not, the Trans-Siberian Orchestra has been touring for 20 years and while always possessing a strong link to Savatage (alumni Chris Caffery, Zak Stevens and Jeff Plate are onstage), the ongoing mega-phenomena has lured respected artists, from other metallic units, into the fold. For 2018, that includes Symphony X singer Russell Allen, reprising his role in the choir that began back in '13, and Whitesnake guitarist Joel Hoekstra. Interestingly enough, that pair recorded together on the string-bender's solo effort, called (paradoxically) 13. Great to see Allen performing again, after the Adrenaline Mob bus tragedy, a year and a half ago.

Not a conventional rock show, but still don't understand being relegated to shooting from the soundboard (at the back of the hockey arena). The standard "first three song" rule for photographers (except for legendary Mark Weiss, who was alone, in the front row the entire show) proved ridiculous, since that sequence was comprised of a prerecorded video and a pair of songs where the eight person choir (equally split between the sexes) and a string chamber orchestra, featuring seven local classical musicians, were onstage, but not the rock musicians, who eventually descended from the heavens on levitating platforms. The stage was dark, illuminated only by the giant video wall behind drummer Plate. Not that the Trans-Siberian Orchestra company really needs any promotion from the metal community, or anywhere else these days. Two line-ups, one touring each side of the country, sometimes playing two shows in a day, they're doing just fine, thank you! Nice touch though, having it "snow" during "Winter Palace". Lots of moving parts onstage:raising and lowering the stage to create an old theater entrance and a marquee, the backdrop for the Ghost Of Christmas Eve narrator. On two small screens, the DVD for said story added a visual for those unfamiliar with, or unwilling to pay attention to, the vocals.Relating the tale of someone down on her luck, who rediscovers the meaning of Christmas and importance of family, it resonated with the multi-generational matinee audience. It's a generally G-rated visual spectacle that encompasses the entire venue, performers entering the audience, flying overhead and dropping smoke/snow on top of them. There are lasers, fire, video enhancement (globe, forest, crumbling castle and that's just in the first few songs), plus indoor fireworks! 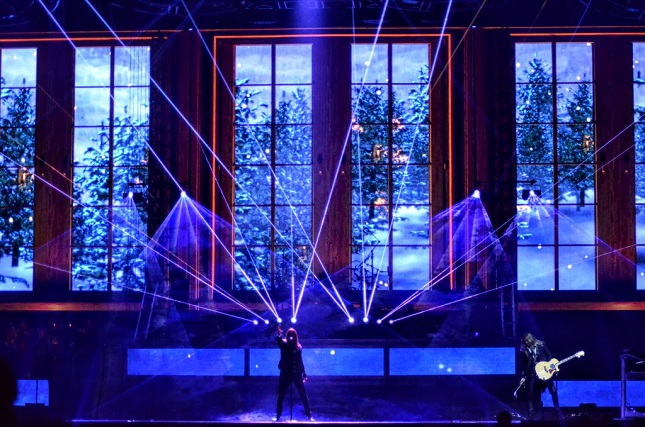 Purple and blue lasers criss-cross the stage, like some three dimensional video game, during otherwise dark stage for "The Lost Christmas Eve". Instrumental versions of "O Come All Ye Faithful / O Holy Night" allow Chris and Joel to showcase their chops, especially the later, who frequently drops to one knee, the other leg outstretched, as he bends backwards and shreds. As for Caffery, he runs all over the stage, up to the second level, and back as they segue into yellow lit "Good King Joy". It affords sunglasses wearing Sir Russell Allen (as he's introduced to the crowd, during the makeshift intermission, the last of the eight chorus members to be honored), some time center stage, to let everyone else hear what Sym X fans already know: boy can that guy sing! He's followed by Stevens, who clowns with Hoekstra and Caffery on "Christmas Dreams", the backdrop illuminated with a snow covered village, as it pans down each decorated street. "Christmas Eve (Sarajevo 12/24)", the Savatage tune that started it all (then adopted by Trans-Siberian Orchestra and now the tune synonymous with flashing Christmas lights and/or countless post-Black Friday TV ads) sees Caffery leave the stage, running up the aisles, through the crowd, to the back of the venue. There, he mounts an elevating arm that launches him up, over the crowd, pivoting from side to side. Meanwhile, on the laser laced main stage, almost 200 feet way, it's three across the front. As a wall of TV screens flash all the world's ills and real flames ignite at various points, Joel again drops to a knee, as attendees' eyes are forced to battle between the attractions at opposite ends of the building.

The Caffery guitar introduced "Christmas Canon Rock" has the four female singers center stage, as seven illuminated rings descend from the rafters. "What Child Is This?" slows things down, temporarily, with yellow and orange clouds background. A bluesy" Music Box Blues", lyrics by a lone lady, begins with visuals of a windowsill candle and namesake music box, but morphs into a roaring fire, beneath a grand mantle. Both guitarists venture back into the audience during "First Snow" (which sees a second helping of the white stuff, falling from overhead). Plenty of lasers, even flickering on the fans. Robust "This Christmas Day" caps the story, in triumphant fashion. Upon its completion, Caffery (the emcee) introduces each singer, then the second half of the show (a Trans-Siberian Orchestra Greatest Hits) begins, many of the performers loosening (or in the case of Hoekstra, sleeveless and in vest) abandoning the more formal (black tuxedo tails jackets) attire. The Sav guitarist hints the first song might be on some of our "Wish Liszt". The tower of Big Ben and the inter-working gears of clocks are shone. 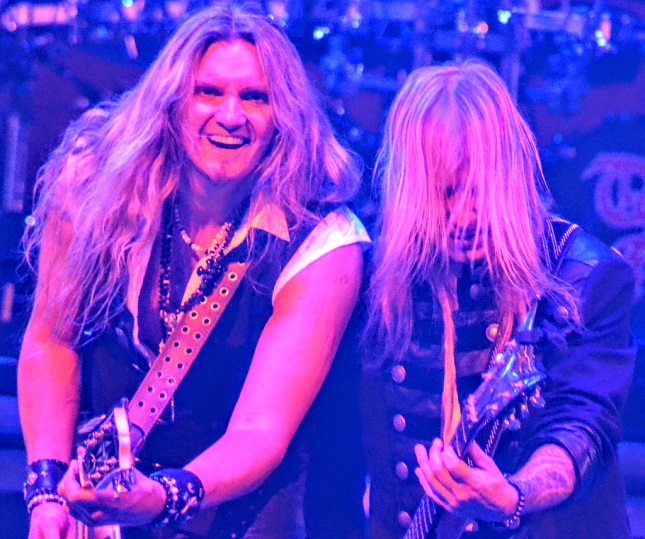 The song sees the return of Allen, minus shades, in front of a toy store. He removes his jacket, singing in a vest and is eventually joined by the rest of the choir. Marching tin soldiers onscreen. four shadowboxes arise from the floor, allowing the lades, now in sleeveless vests and shorts, to dance provocatively (unlit, in shadow), during the instrumental, until the platforms disappear from whence they came. Heavy layer of mist covering the stage spills into/over the first few rows of the crowd, as the violinist becomes the focal point of 'A Mad Russian's Christmas". For "Hark! The Herald Angels Sing", Joel and Chris solo in front of a stained glass backdrop. Playing alternately off each six-stringer, one-time American Idol winner Caleb Johnson headlines the honky tonk piano "Three Kings & I". On the jumbotron, a myriad of shifting squares, as multi-angle fire spurts strafe the stage. Joel heads to the back of the venue, while on the main stage, Caffery and violinist board separate 250 degree swinging arms that will take them atop most of the crowd and near those in the second tier, during "Wizards In Winter". Atop his platform, Hoekstra aims his guitar, like a rifle. Must be sort of strange (if not disconcerting) to be aloft, in the dark, on such a tiny platter. Oft used in movies, the bombastic (evil/triumphant sounding) "O Fortuna" from classical Carmina Burana composition was accompanied by (real/video) flames, as well as red/green burning phosphorous eruptions. "Someday" is another female vocal, the soloist under a shower of purple spotlights trained on the mic, center stage. In the old days, it would have been a cigarette lighter moment, alight and aloft. These days, it's a cellphone moment, with Joel on acoustic guitar, the only accompaniment. Under yellow lights, with images of speeding hands around a clock face, Zak Stevens gets his second showcase, albeit backed by the full choir, for the old Savatage chestnut "Chance". More fire and the backdrop flashes an endless collage of international flags, often those of enemies side-by-side, or atop one another.

A winking serpentine eye greets "Madness Of Men", with images of fire breathing dinosaurs (heat duplicated, in reality) eventually mutating into a helicopter fire fight, flames shooting from multiple angles, at the same time. Throughout, the histrionic Hoekstra wails away, at the stage's edge. About as far adrift from a Christmas show as you can get. "Find Our Way Home" utilizes a reflective screen with animation of a speeding locomotive. while "Requiem (The Fifth)", featuring the telltale opening notes of Beethoven's 5th Symphony (da da da dum) is augmented by quickly splice, MTV style  film of a young woman (in nightgown) tormenting the composer. Speaking of memorable note sequences, a reprise of the now iconic seasonal light display music (aka "Christmas Eve (Sarajevo 12/24)") rounds out the evening. One of the female singers straps on a guitar and joins the boys for the finale, complete with sparklers, pinwheeling fireworks and explosives.

Even a DVD with split screens wouldn't be able to recreate the epic scale of this performance, but here's hoping they somehow try!