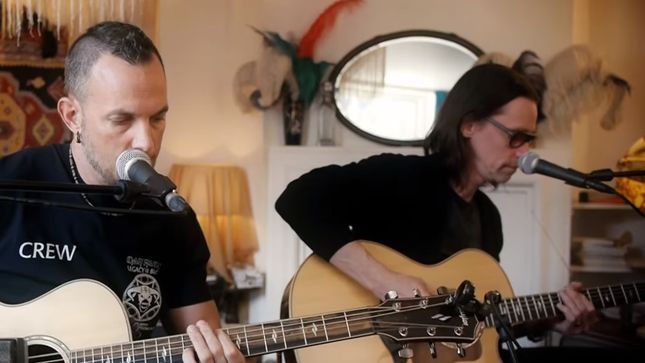 Guitar Interactive Magazine caught up with Myles Kennedy and Mark Tremonti from Alter Bridge for an exclusive performance of the band's new single "Wouldn't You Rather" from the Jimi Hendrix Flat in London, plus chat about the latest album and upcoming tour.

On the heels of wrapping up the successful Victorious Sky Tour alongside Skillet and Dirty Honey, Alter Bridge have achieved another milestone in their 15-year career. The latest album Walk The Sky (Napalm Records) has brought the band comprised of Myles Kennedy on vocals/guitars, Mark Tremonti on guitars/vocals, Brian Marshall on bass and Scott Phillips their first ever #1 on Top Current Albums chart.

Walk The Sky entered the official album Charts at #3 in Austria, Scotland and the Swedish Hard Rock Charts, at #4 in the UK and Canada at #5 in Germany, at #7 in Australia and #16 in the US Billboard 200.

“15 years into our career as Alter Bridge and we finally have a #1 for album sales in America! We are over the moon to say the least. More important, we are forever grateful to the fans for making it happen,” explains Myles Kennedy.

“We are so honored and excited about the response to the new album. It is a testament to how incredible our fans are and the support they always give us. Thanks to everyone who picked the album up and helped us achieve another career first for Alter Bridge,” adds Mark Tremonti.

Find the band's complete live itinerary at this location.