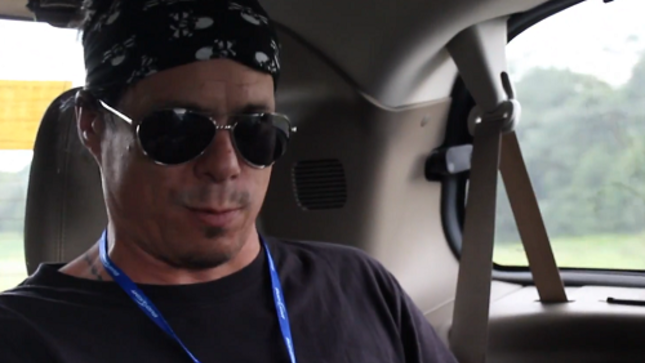 Fortier introduces the clip by saying, "This scene was taken from the rough cut of the film and was asked to be removed. I recently got the 'ok go' from BT to release the clip and wanted to put it out there. Also as a disclaimer, don’t let this clip reflect on the personalities of those involved. Everyone in the clip and band at the time are lovely and talented people. This is only an 'in the moment' reflection of that time period in the band’s career."

"Four long, soul-crushing years went into making this documentary. It was 100% a work of passion straight from the heart," says current Bang Tango guitarist and director of Attack Of Life: The Bang Tango Movie, Drew Fortier. "I am finally at peace with knowing that the film is finished, and probably will never get an official release. So rather than let it collect dust and wait for all the movie business hoop jumping to be cleared up, I have decided to give it to all of you. I know some of you have been waiting a long time.

Since finishing the film I have become a member of Bang Tango. I couldn't think of any better bookend to this whole experience. By the way UMG gave me permission to have it on YouTube, so until I'm told to take it down, it shall remain up. Here it is...

Also huge thanks to everyone who did interviews and appeared in this film, as well as a huge thank you to Dee Snider (of Twisted Sister) for doing the opening narration."

Former Bang Tango guitarist Mark Knight commented, "I just wanted to give a big hats off to 'the kid' Drew Fortier for turning over every rock and stone to tell the story of my old band Bang Tango. It my not be the whole true story of why to this day the band broke up, but as far as anyone knows it's as close to it as anyone will get. Thanks you for having interest in the band and like so many other bands from that era, it is an interesting story to be told. Oh and personally thanks for following me on my musical adventures since the break up of the band in 1995."