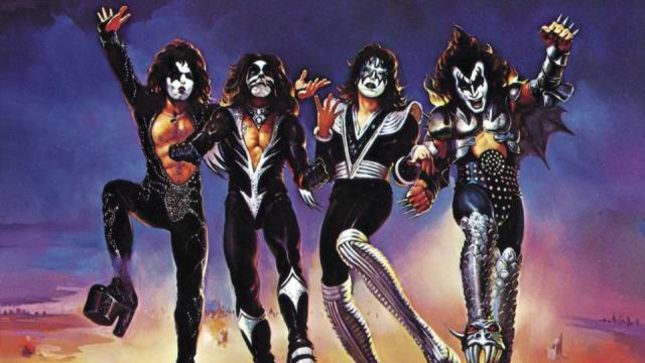 On the latest episode of the Vintage Vinyl Vivisection podcast, host Matt Paradise welcomes writer and musician Joel Gausten for an in-depth examination of the fourth studio album from KISS, Destroyer. Topics includes album production and charting, fan reactions, the cover art and the standout tracks. Of course, there’s always more to the conversation, so the two get into the influences that shaped their musical tastes, the need for sessions musicians on albums, the strange influence of Destroyer on power/symphonic metal, favorite bad KISS lyrics and more. The episode can be streamed on The Accustaion Network at this location.

Vintage Vinyl Vivisection takes you under the skin and straight to the meat of classic heavy metal and hard rock albums. No out-of-touch hipster nonsense or irrelevant political banter here. Just straight talk on records we all know and (mostly) love, brought to you by those who know what they’re actually talking about. Genre-related tangents will also occur.

Joel Gausten is a New England-based writer and musician. In 2014, his 2010 book From Satan to Sabbath: The Metal Interviews 2000-2009 (which features an extensive interview with current KISS drummer Eric Singer) was officially added to the library at the Rock And Roll Hall of Fame & Museum in Cleveland, OH. He is a former member of the bands The Undead (fronted by former Misfits guitarist Bobby Steele) and Electric Frankenstein, and is a recurring participant in the industrial supergroup Pigface. In 1995, he rehearsed with The Misfits as a fill-in drummer and later surfaced on a number of Misfits bootlegs recorded during these rehearsal sessions. Gausten’s current music writing is available at JoelGausten.com.