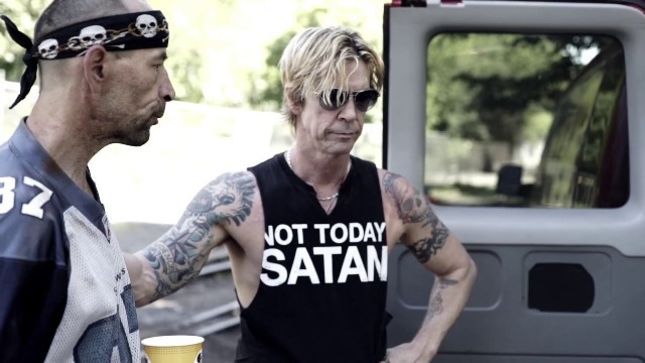 Guns N' Roses bassist Duff McKagan has released a new video for the track "Cold Outside.” The video addresses the growing homeless crisis facing the U.S. and is being released on “Giving Tuesday.” The release coincides with a Propeller campaign that benefits Seattle’s Union Gospel Mission.

The video was designed to help raise awareness and support during the holiday season for the Mission and their work to provide emergency care and long-term recovery services to the hurting and homeless people in the greater Seattle area. "Cold Outside" was featured on Duff McKagan’s new solo album, Tenderness, released earlier this year. The album was produced by and features recent Grammy winner Shooter Jennings.

View the video for “Cold Outside” below.

“In my early days I was in similar situations” recalls Duff McKagan, “so I know what it’s like to not have anyone to turn to and sometimes need a helping hand to get back on my feet. I know many others in need,” Duff continues, “and I am hoping that, if we come together, we can help make a real difference.”

Duff McKagan has given much of his own time to this campaign and has donated memorabilia as part of the Propeller campaign with all proceeds going to Seattle’s Union Gospel Mission.

Through the Propeller platform, fans will be able to earn points as they “take action” by volunteering at the Union Gospel Mission, donating to the Mission, sharing the campaign info on social media to help spread the word, and buying donated memorabilia. Items include a signed Litho, a signed Tenderness Deluxe LP, as well as a Tenderness U.S. Tour t-shirt, wristbands and more.

All donations made on Tuesday, December 3rd, will be matched dollar for dollar (up to $60,000) by an anonymous donor.